The Sherwood Rangers, Syria, 1918. A mix of six Mutton Chop British Cavalry, two Great War Miniatures  early war British Cavalry Troopers and two Perry Miniatures WW2 British Yeomanry command types. All the troopers have been given Woodbine Designs head-swaps to try to get that very late war in the Middle East look. A mix of khaki drill and serge uniform here. A few painting short-cuts have been taken on some of these figures as the clock is ticking and there is still the dismounted Sherwood Rangers and a number of miscellaneous figures to do before the game at Colours.

Captain R H M MacIntyre MC, Officer Commanding 7th Light Car Patrol, a Lieutenant as a driver and a Corporal frantically trying to signal the leading elements of the Desert Mounted Corps for the Syria 1918 demo game at Colours. The car is a Matchbox 1909 Opel.... it should really be a Model T but Adrian had this model and it needed to be used. It is, perhaps, a little large and out of scale but it is great fun. That is what it is all about as far as I am concered. The Captain, standing on the front seat for a better view, is an Empress Miniatures figure, as is the driver, and the Signals Corporal comes from GWM. All have had Woodbine headswaps. 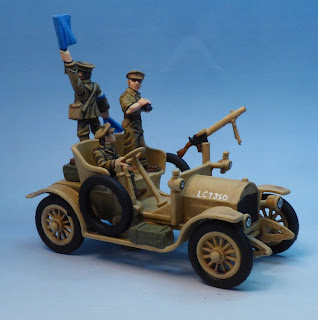 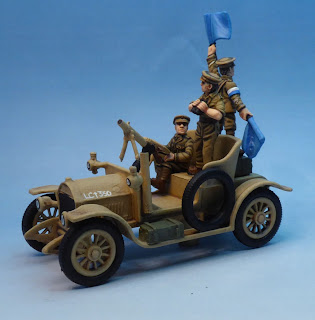 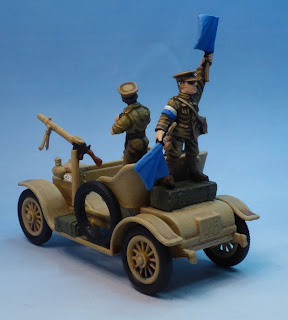 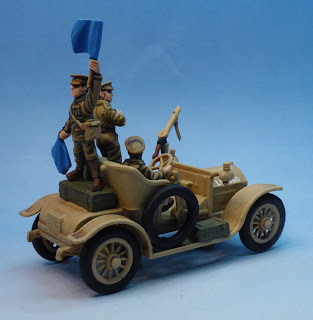 The 1er Regiment Mixte de Marche de Cavalerie du Levant. A very impressive title for the composite French cavalry regiment that served in Palestine. Formed from two squadrons of Spahis and two squadrons of the 4er Chasseurs d'Afrique, the pre-war colourful French Colonial uniforms have given way to mustard khaki and Adrian helmets. Again, painted, based and varnished speedily over four days for the Syria 1918 demo game at Colours 2018. 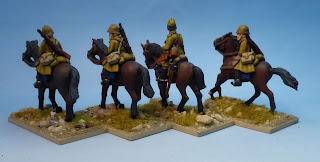 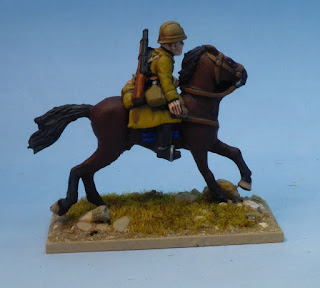 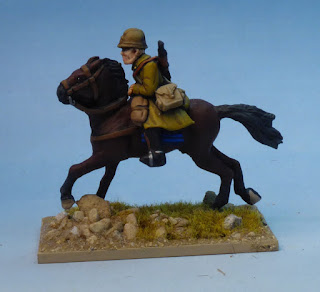 These are Crusader Miniatures early WW2 French cavalry with a GWM French Dragoon Officer to lead them. Only three Crusader figures have their original horses. The other horses are of unknown origin as this unit was scratched together from some figures that Adrian and I had in our respective lead piles. Some of the Crusader horses had been used elsewhere. Some purists may complain that the equipment is not correct but I don't care. What was important was that we have some mounted troops, clearly identified as French, wearing adrian helmets. I don't have time to carve off and resculpt the canvas ANP 31 bag. Paint it khaki and it is just a bag! These chaps appear briefly in this piece of footage from the Imperial War Museum entitled "Armageddon" (4 mins 44 seconds in). Here they are in a screenshot from the film. 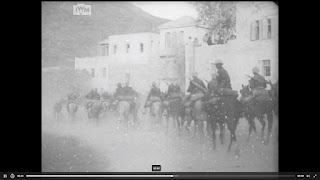 Next.... a command base featuring Captain R H M MacIntyre MC, Officer Commanding 7th Light Car Patrol, his driver and a bloke frantically trying to signal the leading elements of the Desert Mounted Corps.... and a car, of course.

A British Mounted Machine Gun Squadron for the Syria 1918 demo game at Colours 2018. As time is short a few time saving painting shortcuts have been made on these figures. They still pass muster to my eyes. The deployed piece is the Britsh Cavalry Vickers Team from Great War Miniatures with a Woodbine headswap. The transport is a very satisfying composite made from odds and sods in the bits box. The horses and drivers come from the Wargames Foundry WW1 British Limber set (the drivers have a Woodbine headswap to give them tin helmets with neck flaps), the limber with stowage is from Tiger Miniatures and the Limbered GS wagon is what remains from the Great War Miniatures Machine Gun Wagon set (horses, drivers and wheels were long since canibalised for other projects). The wheels were in the bits box and were the same size as those on the Tiger Miniatures limber. The tarp over the contents of the wagon is a simple a piece of masking tape. I opted to paint the personel wearing khaki serge as while watching film of the 1918 campaign through Syria it was clear that a lot of serge was being worn rather than khaki drill. 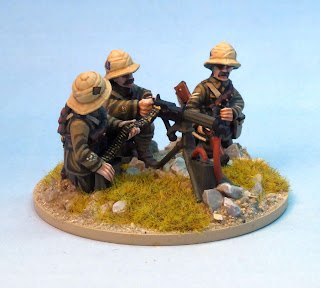 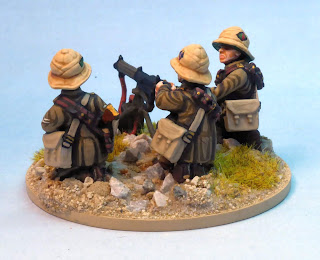 More for the Syria 1918 game at Colours, Newbury, this September.

The excellent Crossley Tender from Trenchworx. This will supply 7th Light Car Patrol. 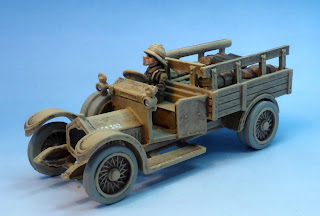 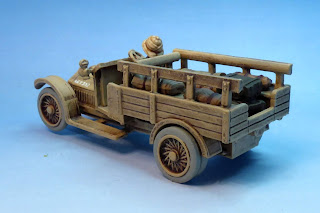 Dismounted French Spahis. Woodbine Designs figures with added greenstuff on the headgear and a number of Empress Miniatures SCW figures in adrian helmets to make up the numbers.

Next? 20th Mounted Machine Gun Squadron and a unit of French Mounted troops.

Tsuba Miniatures Russian Bandsmen. Painted up as the regimental band of the White Russian Kornilov Shock Battalion. All part of a cunning development for the League of Extraordinary Kriegspielers' recent gaming weekend. I also painted up another band in a different White Russian uniform but I neglected to photograph them before delivery. Fool. 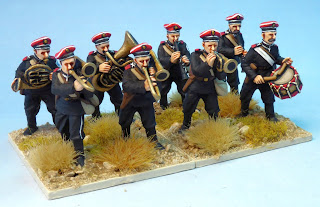 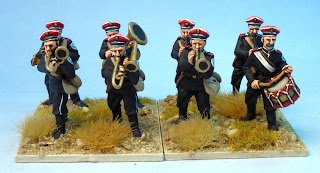 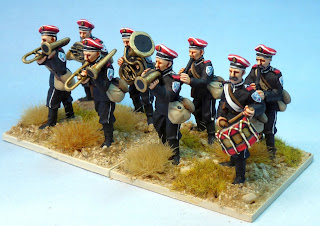 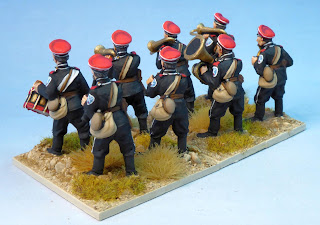 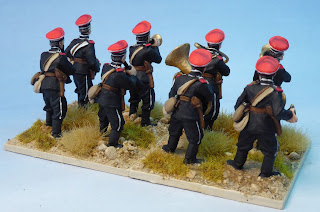