The Coppers themselves. A rather mean looking bunch with little understanding of modern methods of Community Policing. Here painted up in the green uniform of the Ottoman Marine Police. 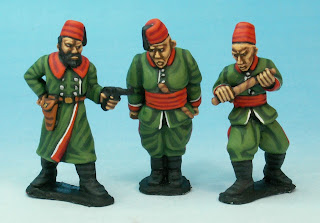 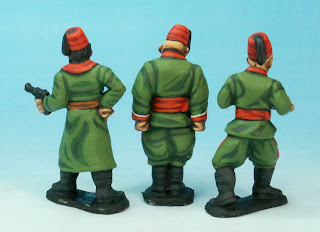 The Sons of the Desert are complete. 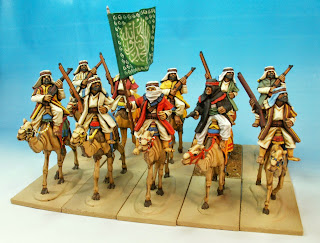 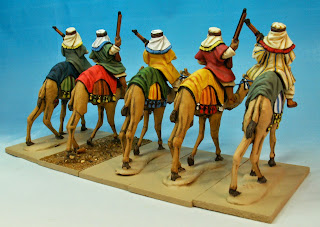 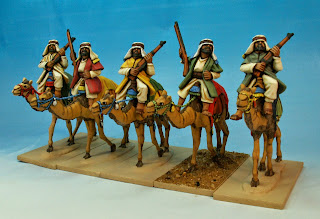 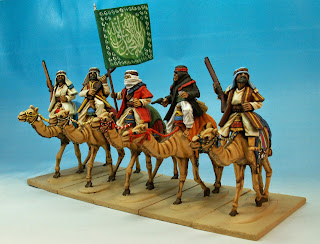 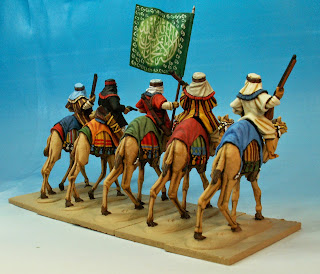 Centenary Pilgrimage to the Salient.

It has been over a month since I last posted. Painting in that time concentrated on completing the "Banana Wars" USMC. The vast majority were duplicates of those completed figures already posted so no images I'm afraid.

Last week we went to Ypres. We stayed at a B&B on the Menin Road near Hooge. Tuesday 5th May marked the centenary of the death of my wife's Great Uncle, Alfred Felton "Fred" Mathews. He served with 1/12 London Regiment (The Rangers) TF. On that day we drove to Wieltje to the Monmouths' Memorial as it marks the position of the trenches manned by the Monmouths on 8th May, 1915. The Rangers manned the same position on 5th May, 1915. Find the memorial... find the place! This was important as Fred has no known grave and his name is carved upon the Menin Gate. Fred was a bank clerk, a Sunday School teacher and eight months a soldier. I knew his sisters Dorothy (my wife's Gandmother) and Winifred (Aunty Win). Both these venerable ladies left us in the 1990s. Neither had been to the Menin Gate. We did this as much for them as for ourselves and Fred's memory. 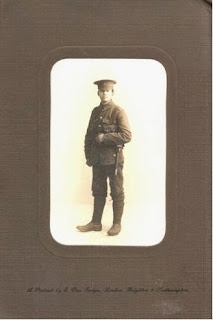 We found Fred's last known position. We left a marker. 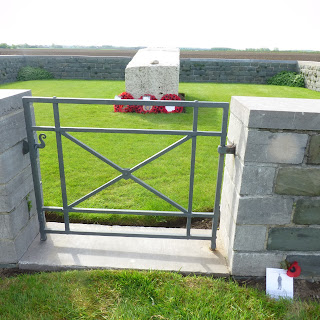 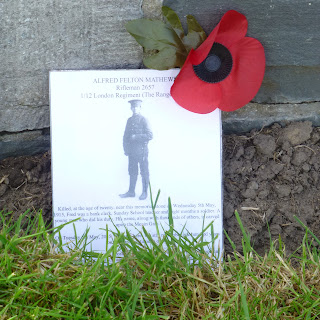 The Monmouths' Memorial, Wieltje, and our marker outside the gate. 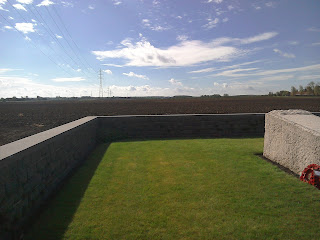 The trench lines in 1915 crossed the field beyond the monument stone almost parallel to the power cables. 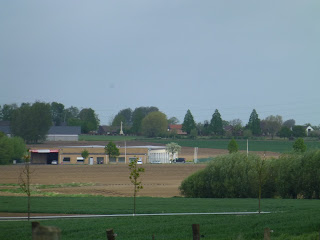 The nearest "concentration cemetery" to where Fred died is the Oxford Road Cemetery in Wieltje. This is marked in this photo by the Cross of Scarifice in the distance. This photo shows the village of Wieltje on the crest of the ridge as seen from Railway Wood. After the war the remains of soldiers were relocated to such cemeteries bringing the fallen together. I believe that if Fred's remains had been found, they would have been brought here. We visited the Oxford Road Cemetery. There are a number of headstones that read "Seven Soldiers of the Great War, Known Unto God" or another number. A cluster of such graves are located very close to the gate. These headstones bear no date and mark the relocated burials. Fred's remains would be there if found. The remainder date from 1917-18 when there was a dressing station located under Wieltje in the massive "Hades Dugout".

That evening we attended the "Last Post" at the Menin Gate and left a similar marker close to his name on panel 54. 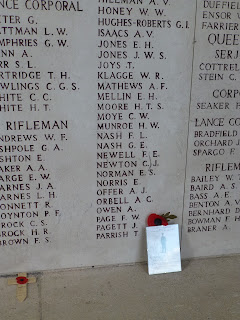 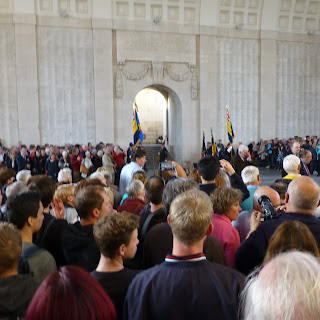 I am glad we did this. It was the right thing to do.

During our stay we walked into Ypres along the Menin Road. I would have walked back that evening but we took the bus after a great meal. We did Ypres, walked the Ramparts, found the casemates where "The Wipers Times" was produced (now home to a micro-brewery that brews a rather nice blond beer by the same name), visited several museums, several cemeteries and monuments, had tea at Toc H (Talbot House) in Poperinge, and spent a day on foot walking the Salient from Railway Wood to Sanctuary Wood. We clambered into mine craters, tripped over stokes mortar rounds and an unexploded British shell topped with a graze fuse, stood stooped in concrete bunkers in Bellewaerde and learned that driving on the right is not as frightening as I thought it would be. We also drank some beer. 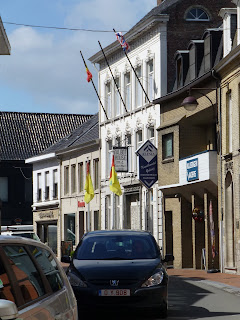 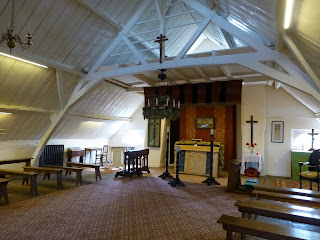 Rev. "Tubby" Clayton's Chapel at Toc H. I did not expect to be so moved when there. 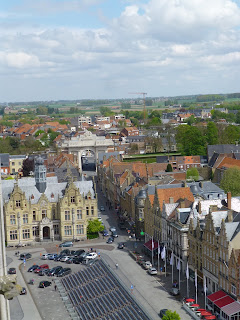 Ypres from the Bell Tower of the Cloth Hall, looking out towards Wieltje. 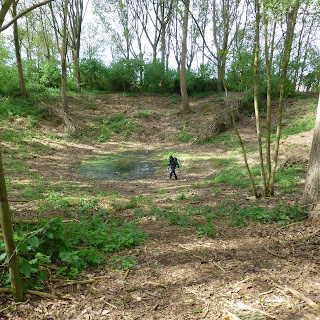 Me, in the bottom of a mine crater in Railway Wood.
A few seconds later I would trip over the shell in the next photo. 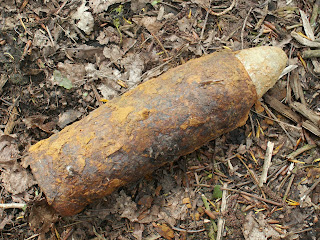 I was so astonished to find this, I had picked it up before I realised what I had done. Needless to say that my wife told me in no uncertain terms to put it down. 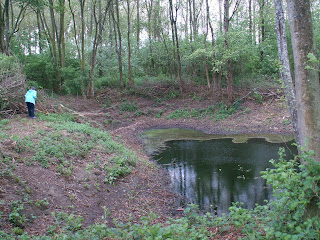 My wife, checking another mine crater at Railway Wood for unexploded ordnance before allowing idiot husband to climb in. 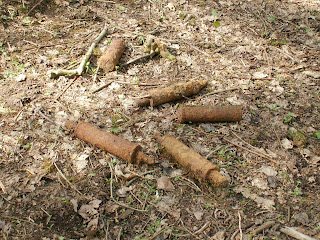 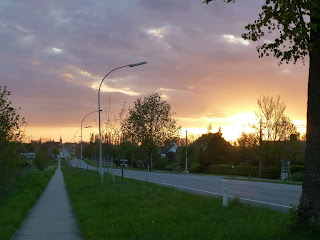 The Menin Road from Hooge looking towards Ypres. 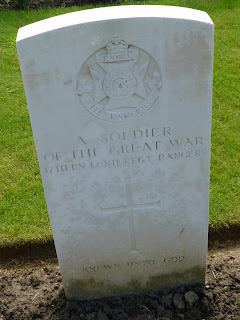 We searched desperately at cemeteries around Wieltje for just one headstone bearing the cap badge of 12th London Regiment. We found not one. I was saddened, when in Oxford Road Cemetery, the closest concentration cemetery to the field where Fred was killed, to find single headstones with the words "Eight Soldiers of the Great War. Known unto God." Some said "Five" others "Seven". One row of twelve headstones marking these relocated graves contained the remains of over one hundred unknown individuals. This is probably the reality of what happened to Fred's remains as the ground on the Salient was turned into a moonscape over the next three years following his death. We stopped looking for a Rangers badge. Then, as we entered Sanctuary Wood Cemetery on 6th May, we found this, the only headstone we came across bearing the regimental badge. A Tommy who was probably killed in 1917 given the location and the dates of the deaths of those around him, but like Fred, a Ranger and unknown. 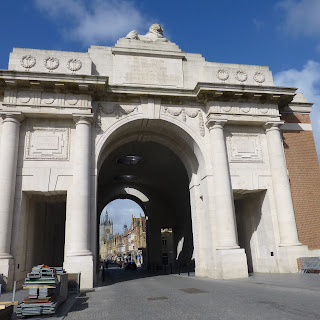 The final photo of Ypres. My wife memorably said that until she visited the Menin Gate, she never really understood the meaning of the word "monumental". For me, the lion on the top of the arch, looking defiantly east towards the Salient, now has even greater symbolism.

I need to go back there again. 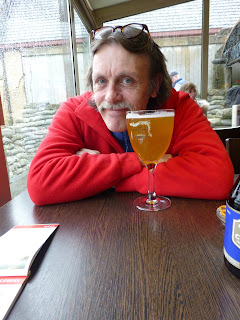