Good heavens, I found some unexpected, yet rather welcome, extra time at the painting table since my last post (yes, I apologise for saying that that would be the last before Christmas). This has allowed me to complete the last five Woodbine Gurkhas and, as promised, here they are along with a photo of the complete unit of ten.

I now find myself with a completely clear painting table. Nothing outstanding. What joy! I have a small plastic box containing a selection of figures that have been saved until I have the time to dip in and wonder "What shall I paint today?" It looks as if I can now indulge myself. I wonder if the Good Lady Wife picked up on the Christmas hints about the re-released Foundry Boer War British Artillery Limber? Or will she, once again, refuse to gift anything related to the hobby, maintaining, foolishly, that "you've got enough bloody models to paint!" 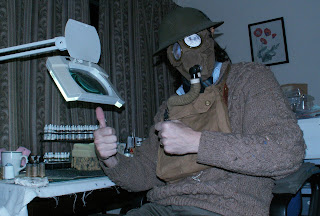 Happy Christmas, everyone. I wish you all peace and prosperity. 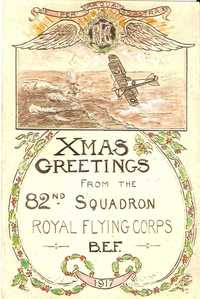 Merry Chrismas, and Gawd Bless Us, Every One. 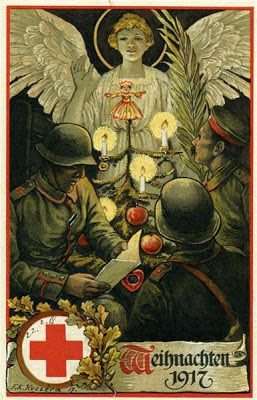 The last post before the holidays, so, Merry Christmas to all. May 2013 see us all healthy, wealthy, but above all happy.
Posted by Over Open Sights at Friday, December 21, 2012 3 comments:

The first five of a ten figure unit of Woodbine Designs' Gurkhas. The next five will be brandishing the kukri. It is good to return to Woodbines painting up a group of figures that I have not attempted before.

A photo of the next five and the completed unit should be up, I hope, just before the Christmas holidays start.
Posted by Over Open Sights at Thursday, December 20, 2012 3 comments:

You may recall that I painted up ten GWM/Woodbine conversions to create the Royal Gloucester Hussars in Palestine, 1917, back in the summer. Well, here are ten of the same but this time dismounted.

The next ten of this batch of twenty. It has taken a while to get them complete due to all sorts of real life getting in the way and hampering the escapism of painting.

Here's one I painted earlier, as they say on all the best telly programmes. 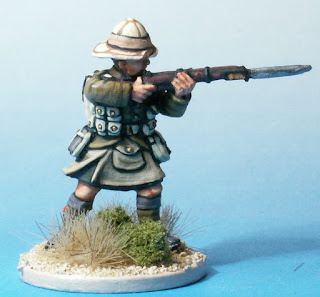 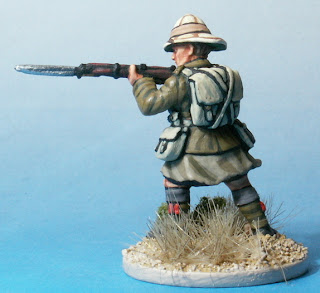 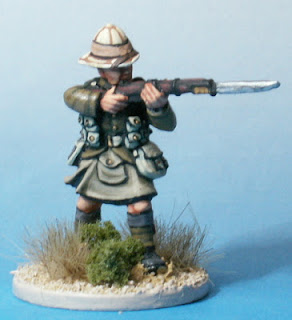 A welcome addition to the cannon of miniatures available for the 1914-1930 period. Great to paint, too. Nice work, Dave. 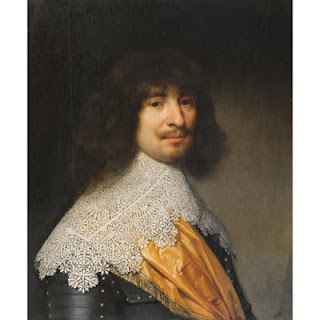 As promised, the two sidecar models. One figure has been given a Woodbine head transplant. 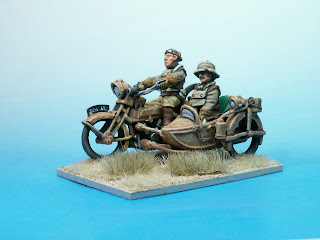 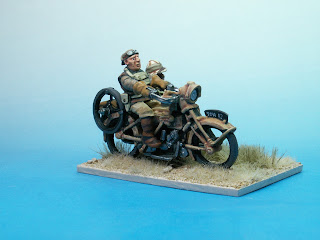 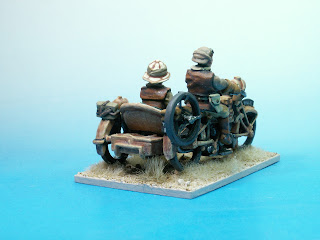 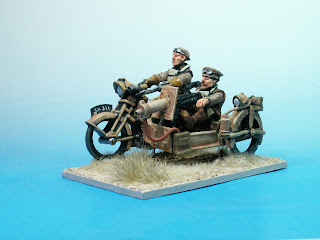 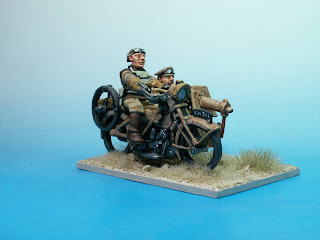 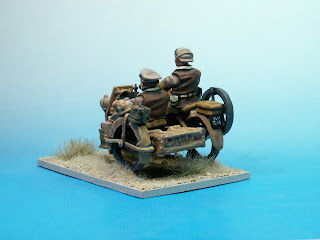 Nine more variants of Pulp Figures US Marine Corps to complement those pictured at the end of August.

Click on the photo for a larger image.
Posted by Over Open Sights at Sunday, October 07, 2012 1 comment:

Vrrrrmmmm!
Painted up for service somewhere hot and dusty. 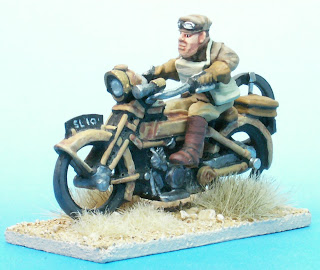 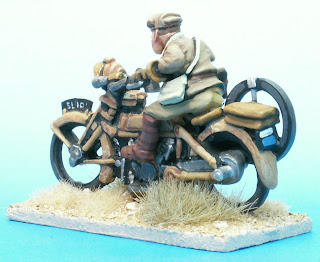 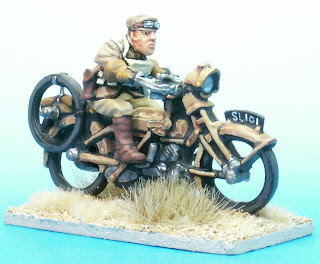 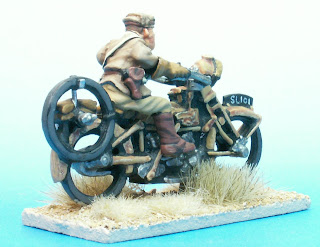 The two models with sidecars to come. Poop! Poop!﻿
Posted by Over Open Sights at Saturday, September 29, 2012 5 comments:

Just the two of them. Hessian Garrison Regiment Von Huyn. I needed to paint something in a cocked hat as I've not done this for a while. 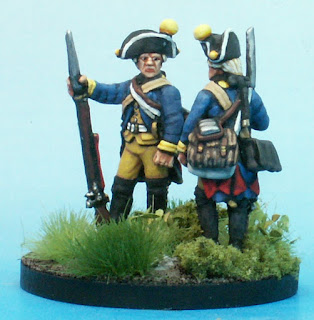 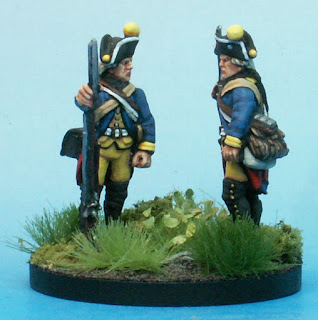 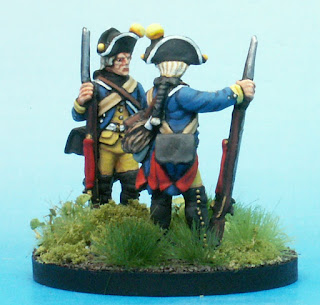 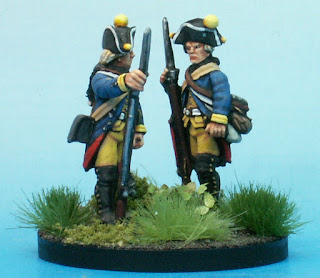 The first figures destined for the Display Case in over a year! I gather that there is a re-enactment group is the U.S. that portray this regiment, but I've not been able to track down a web presence. Would love to know what they look like and to see how just how yellow their small clothes are.
Posted by Over Open Sights at Sunday, September 02, 2012 5 comments:

Click on the photo for a larger image.
Bases to be done by he who asked me to paint them.
Posted by Over Open Sights at Tuesday, August 21, 2012 7 comments:

As promised a few photos of the completed GWM conversions that go to create the Royal Gloucester Hussars. Apologies for the third image.... the camera appears to have shifted the point of focus so the nearest trooper is blurred. Thoroughly enjoyed painting this unit up. 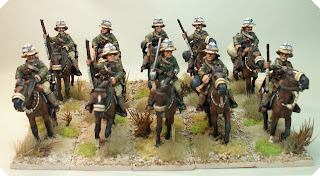 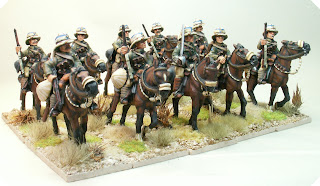 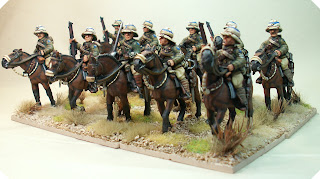