I have some Perry WW2 Western Desert Italians on the table at present. A repeat of those painted up last summer. I won't be posting repeat photos but if you are interested they can be seen here. I spent a liitle time beginning the QODY conversions over the last couple of days. My desire to see some of these figures with the Woodbine Slouch Hat heads was dashed as the faces on these heads are quite broad in relation to the size of the slighter miniatures from Musketeer. They looked odd... with inflated faces. Sadly, the experiment failed and so it seems that QODY will all be in Wolseley helmets. This is not a problem. These first four figures are the Trumpeter and Officer from the British WW1 Cavalry Command pack (BEF 13) and two troopers from the BUF/Yeomanry pack (BCW 18). Some added green stuff to give some baggage on the saddle. A scalpel and file have removed the brassard that the BUF troopers had on their left arms. 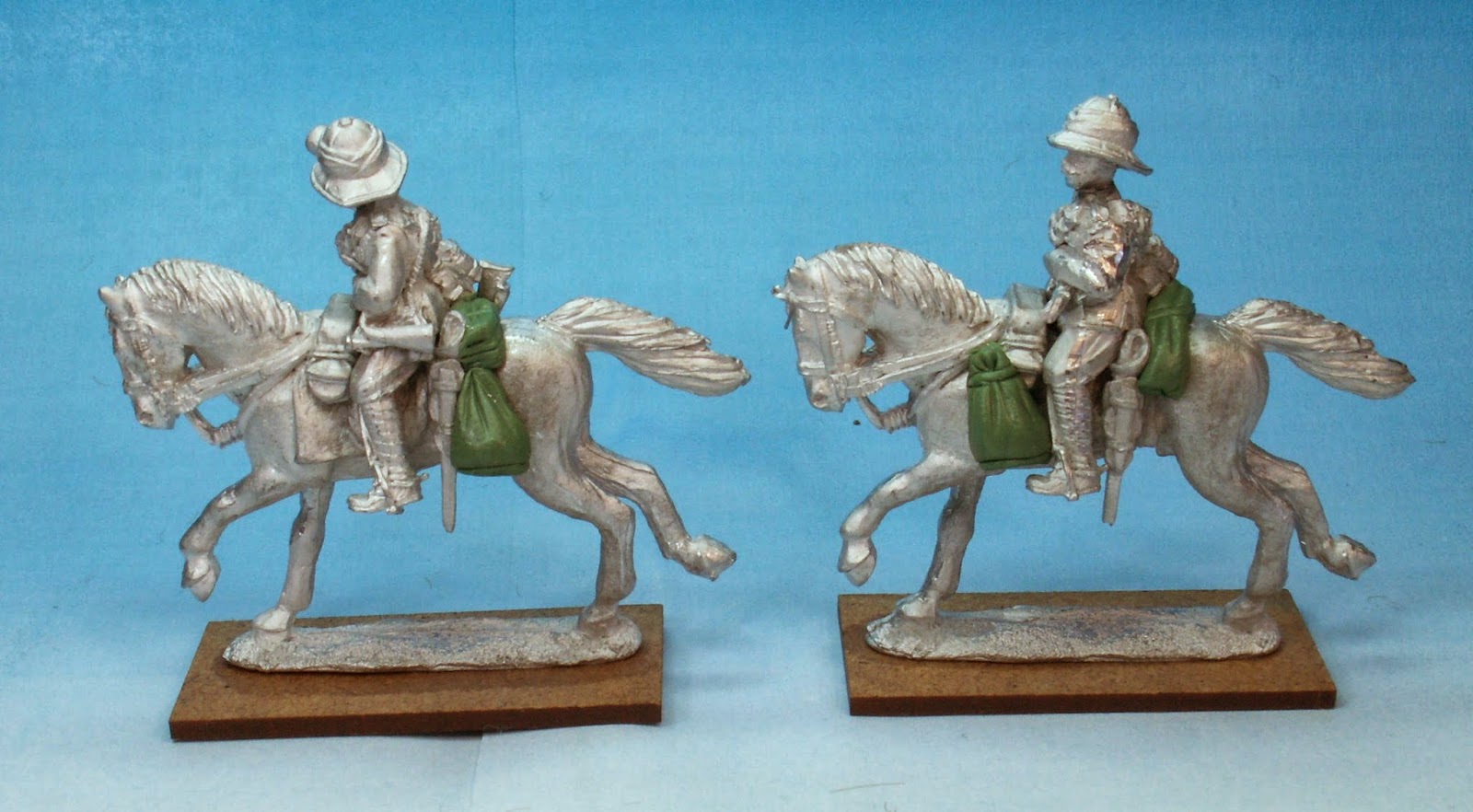 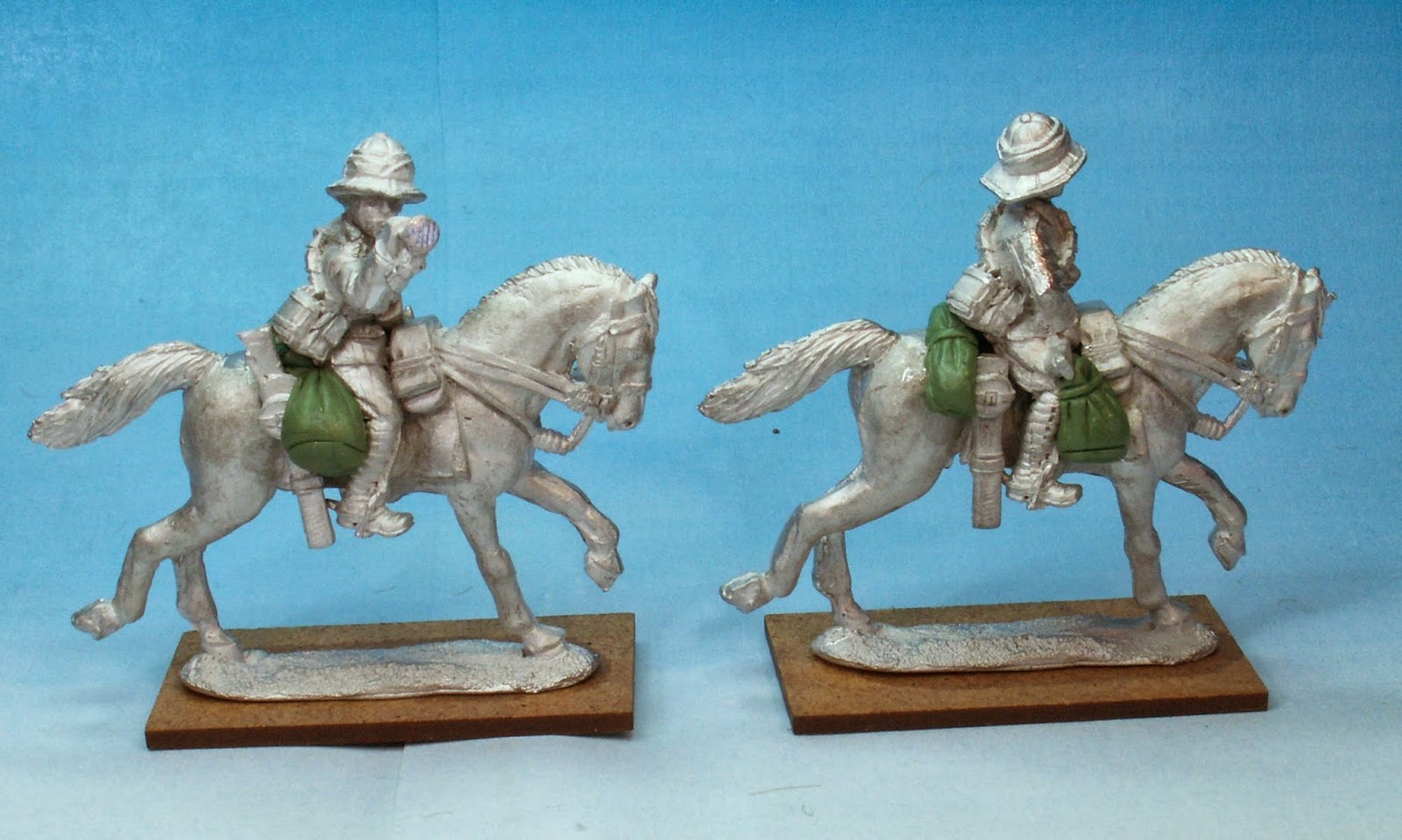 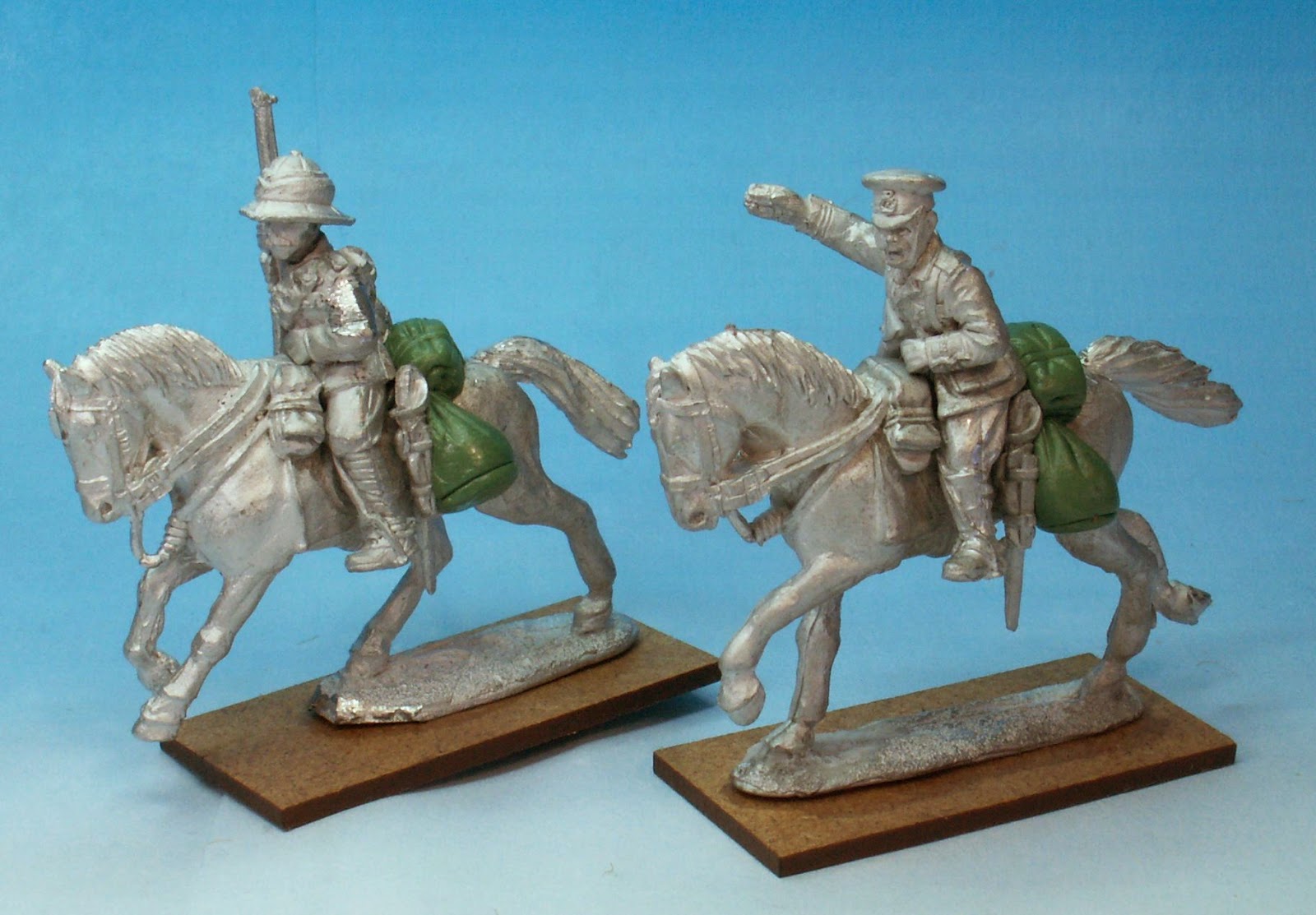 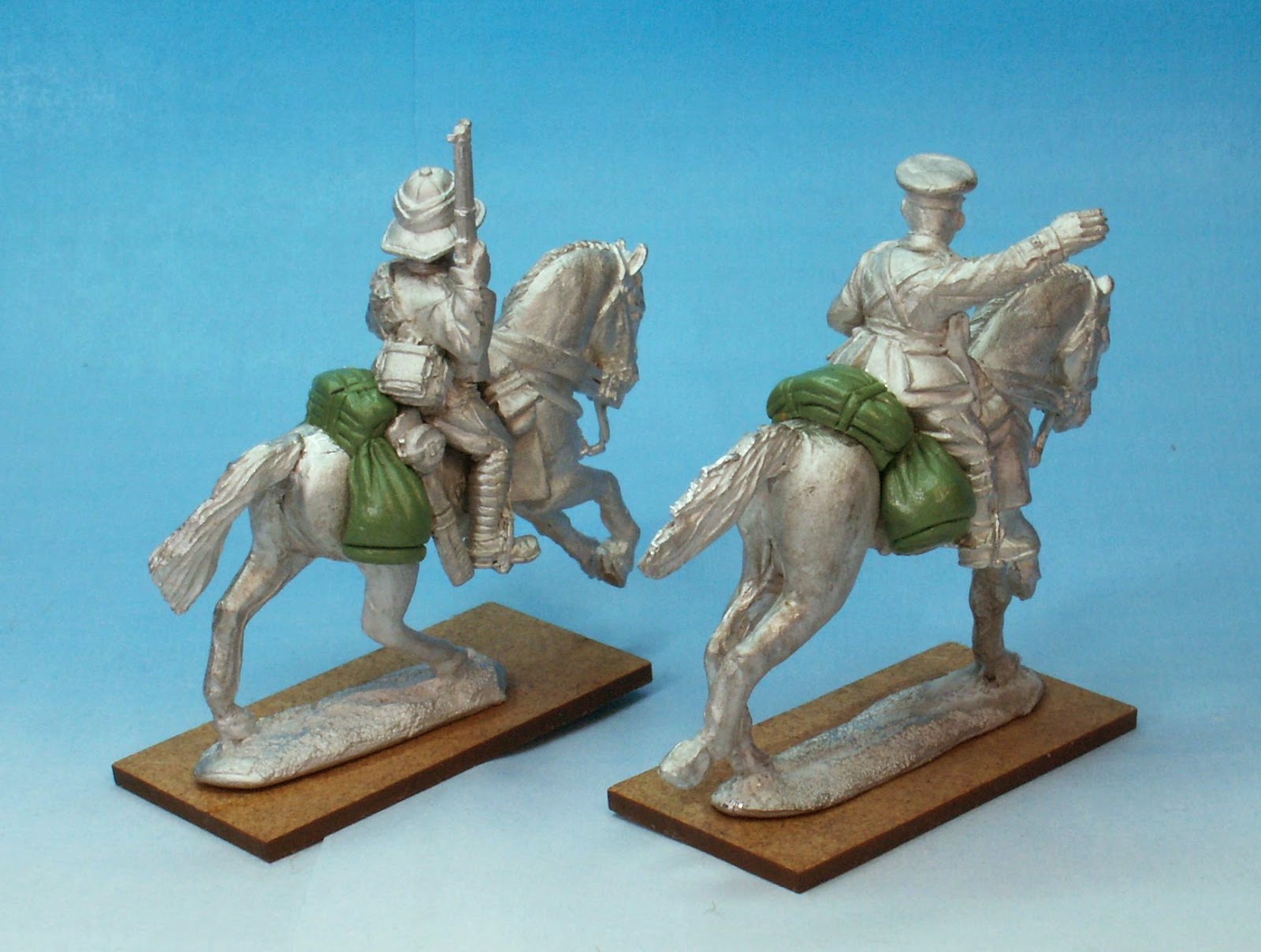 They seem to be progressing to plan, although it is a little disappointing that there are only two horse variants within all these mounted figures. Had I the skill and inclination I'd try to vary the pose on one or two horses for variety.

Running short of green stuff. Must order some more.

A package was delivered yesterday. It contained some WW1 Cavalry figures from the small but perfectly formed range from Musketeer Miniatures, sculpted by Paul Hicks. The package also contained some VBCW BUF/Yeomanry figures (mounted and dismounted) and a smattering of “Black and Tans”, again by Musketeer Miniatures.
I await some heads from Woodbine.
The plan is to do some conversion work on all these figures to produce both mounted and dismounted Yeomanry for Egypt, Palestine and Syria. I’ve been mulling this over for quite some time and have finally got round to doing something about it. These figures, I hope, will give a unit of mounted troops that have a bit of movement about them, the Great War Miniatures cavalry being rather static.

The current picture at the top of the blog is Lady Butler’s painting of the charge of the Queen’s Own Dorset Yeomanry at Agagia, February 26th, 1916. These new figures will represent the QODY. 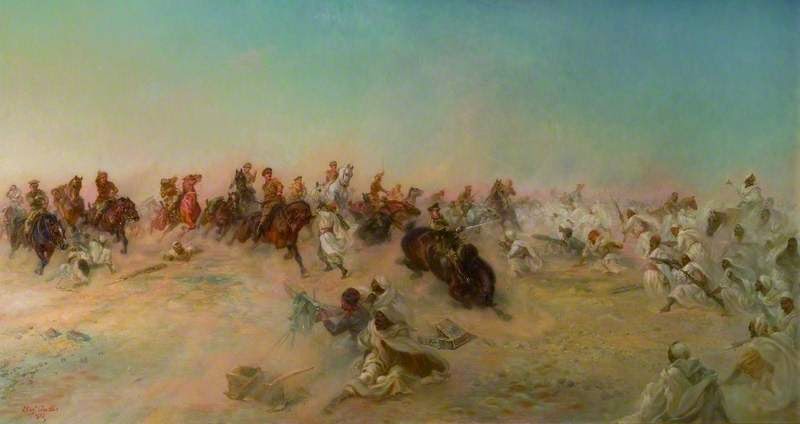 I’ve been trawling the books and the interweb for images, particularly photographs, of the QODY from this particular period of their time in Egypt and Palestine. I like to do this for inspiration. The Western Front Association website has an excellent account of the charge at Agagia written by 2Lt J H Blakesley of “B” Squadron. It also has some interesting photographs of QODY in the Western Desert.

I also found an illustration from a book plate showing the charge where the QODY troopers are depicted wearing slouch hats! How can I resist having one or two figures wearing this? 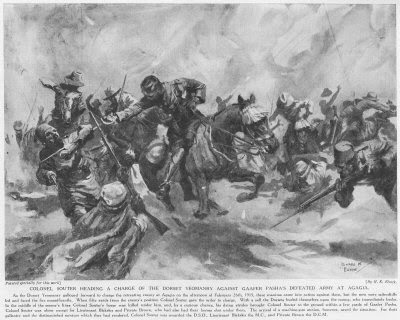 QODY went on to charge the Turkish positions at El Mughar on 13 November, 1917. I was lucky enough to see James Beadle's painting of the action there (below) at the Staff College, Shrivenham, some time ago. It was then that I decided that I had to paint the QODY. 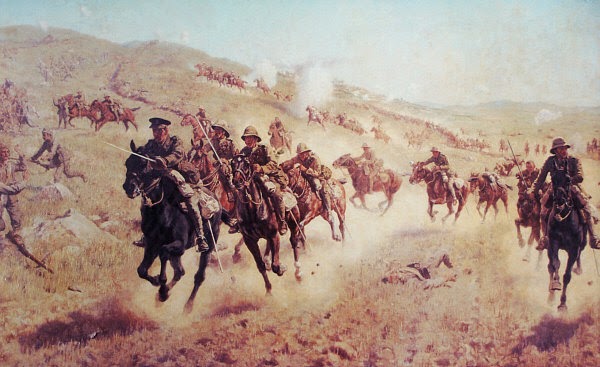 ﻿
So watch this space as this will be a slow burner as I do bits and pieces in amongst commissioned work. 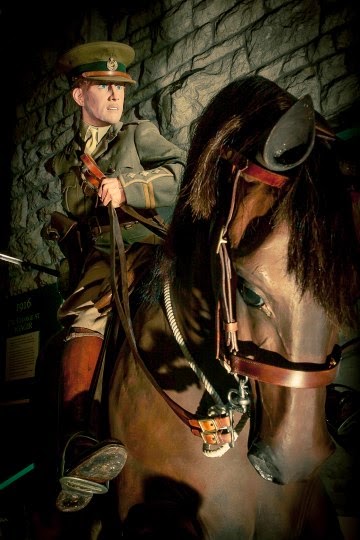 The completed mounted unit of ten figures. This brings the Deccan Horse posts to a close. 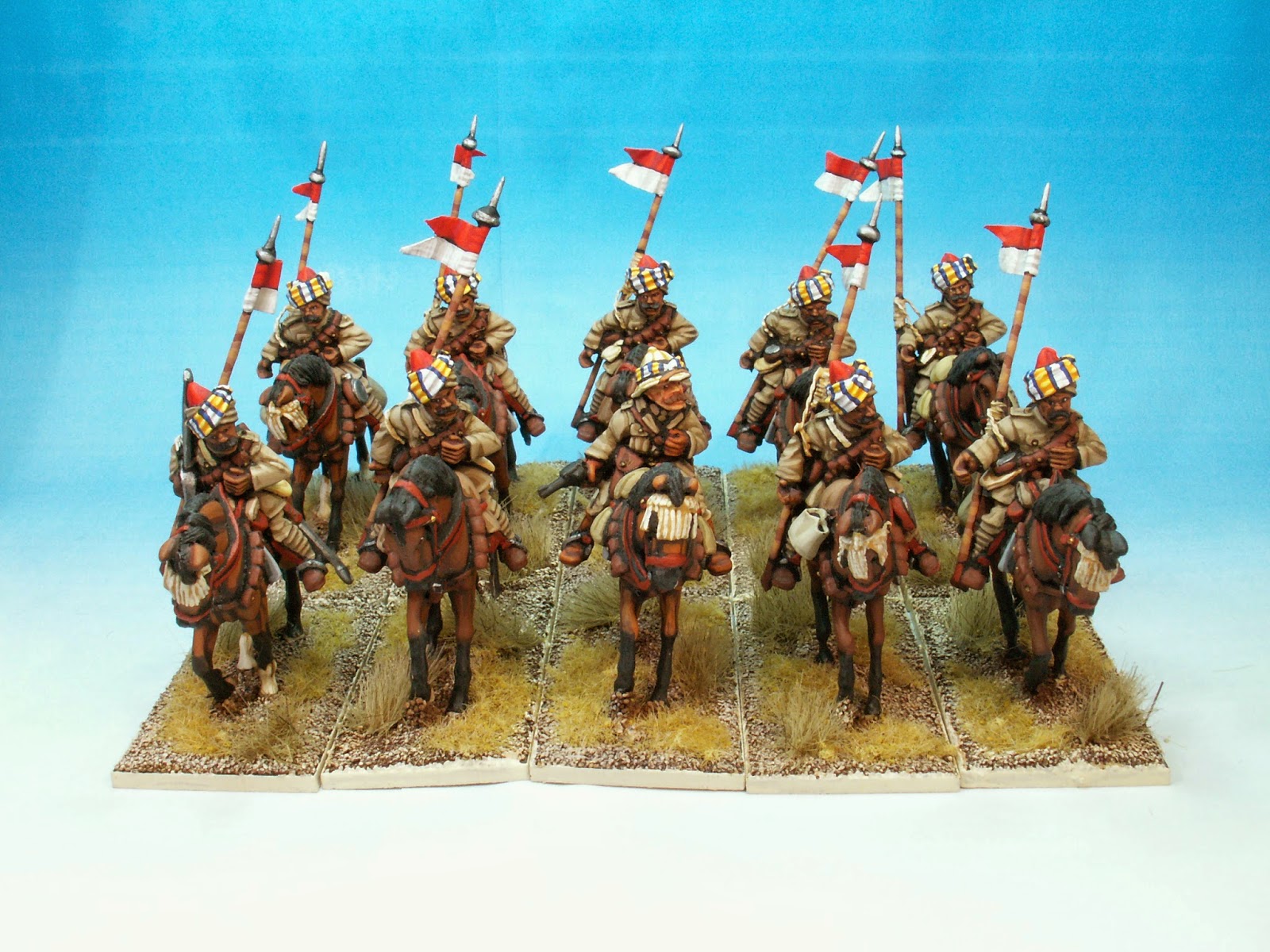 Next, a return to some Perry WW2 Italians with some interesting heavy weapons from Bolt Action. After that, something interesting with a Bolshevik twist. Of course, soon, the Empress Jazz Age Imperialism Scots and the much anticipated Mutton Chop WW1 releases. 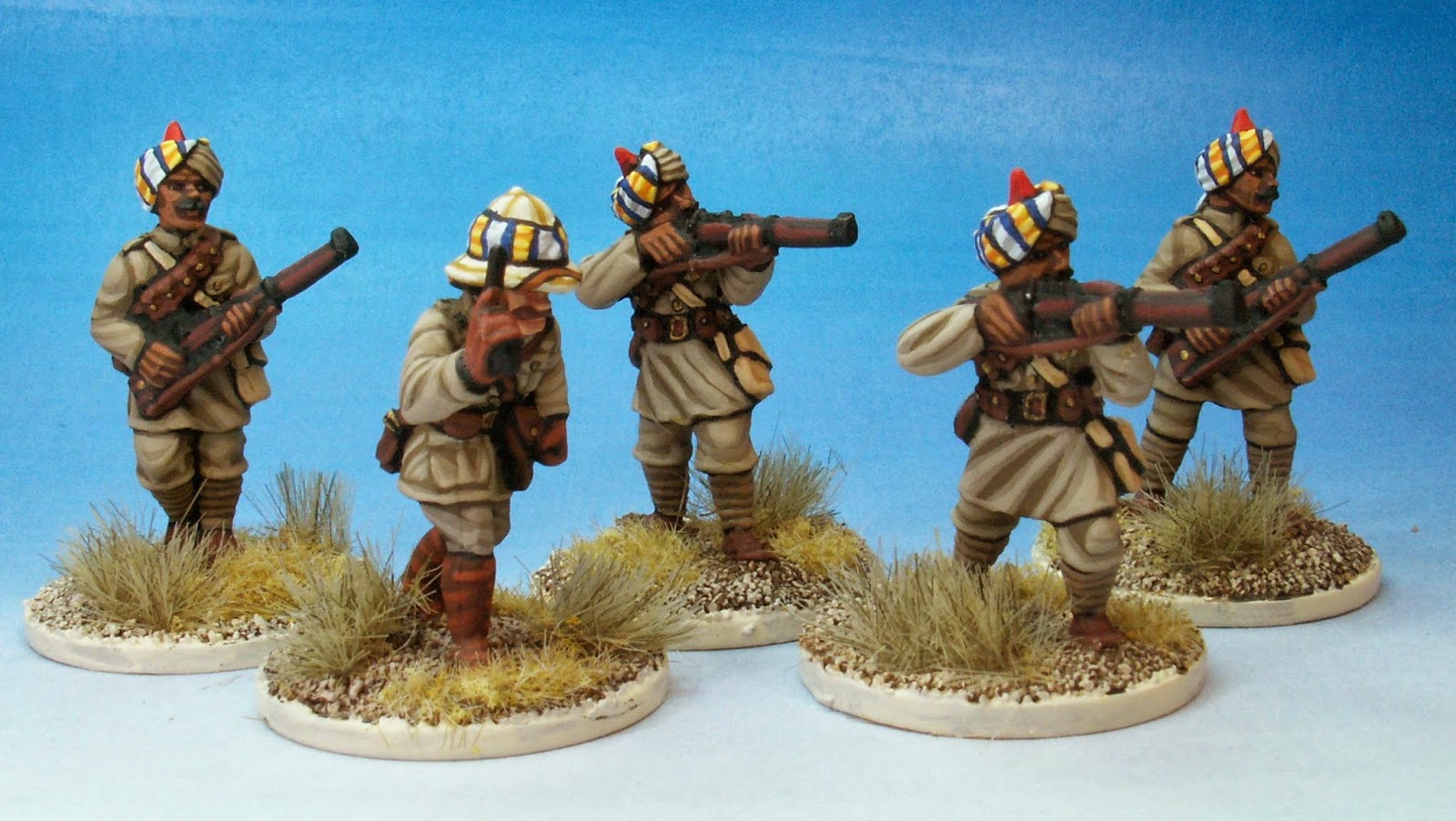 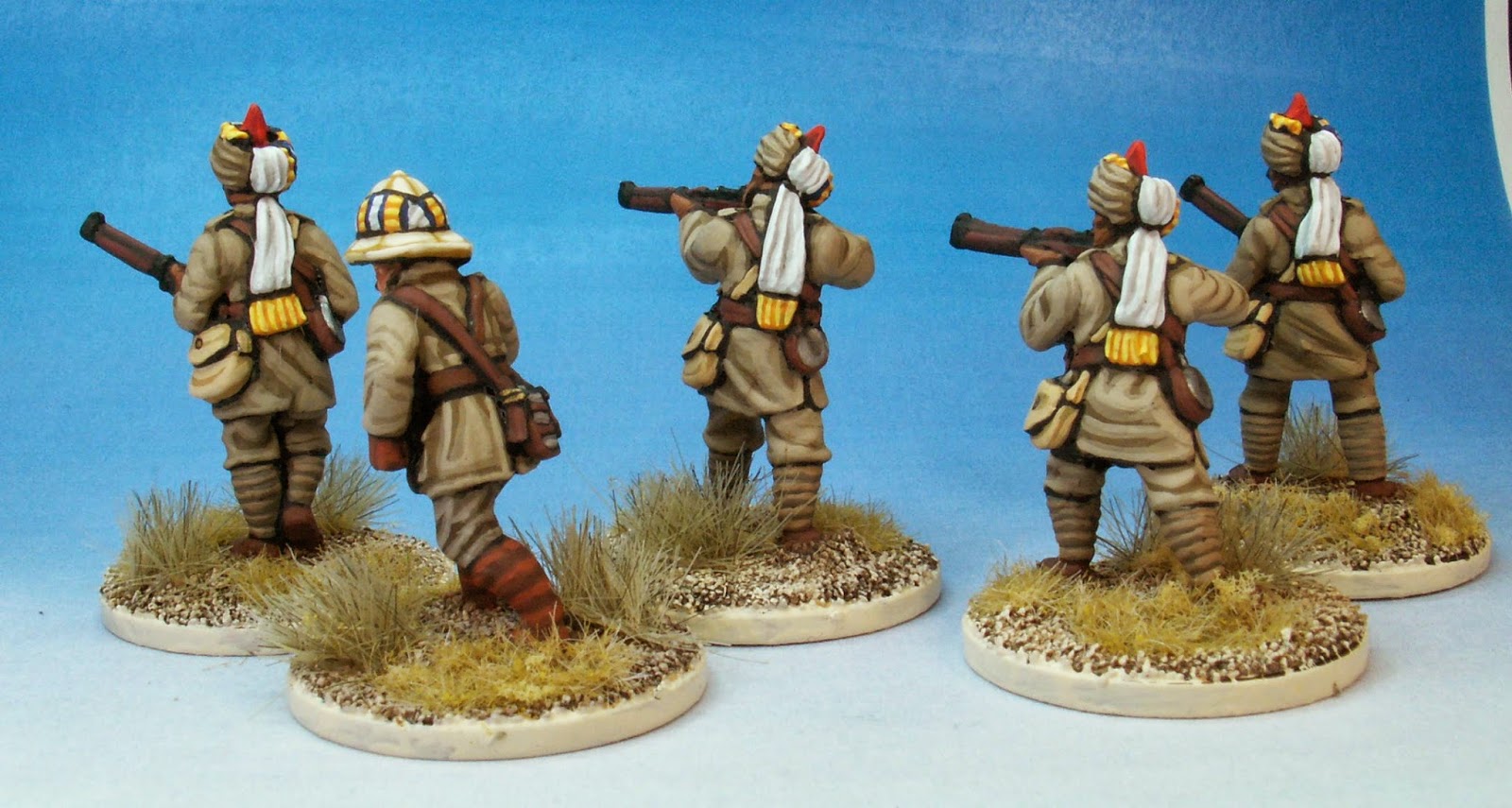 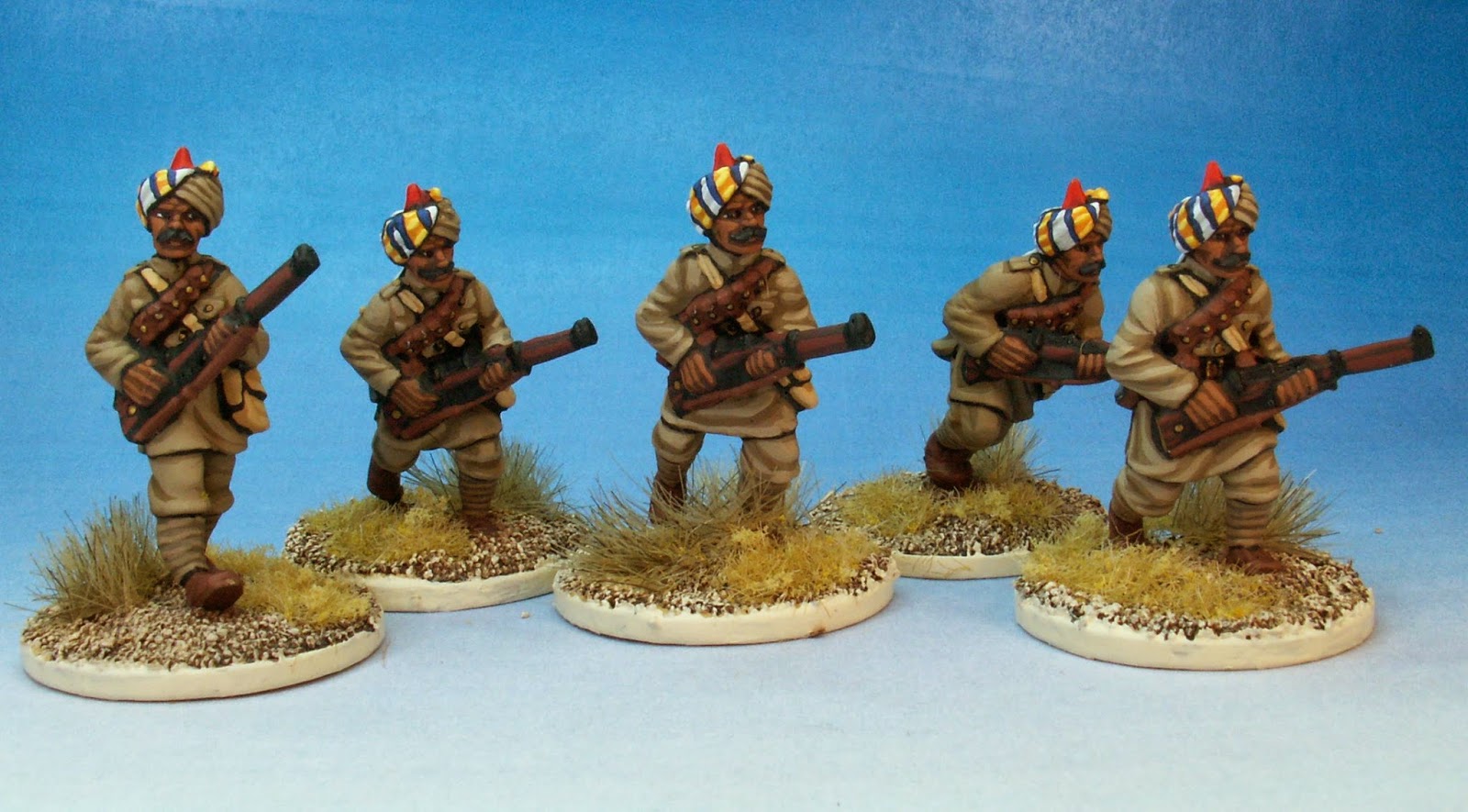 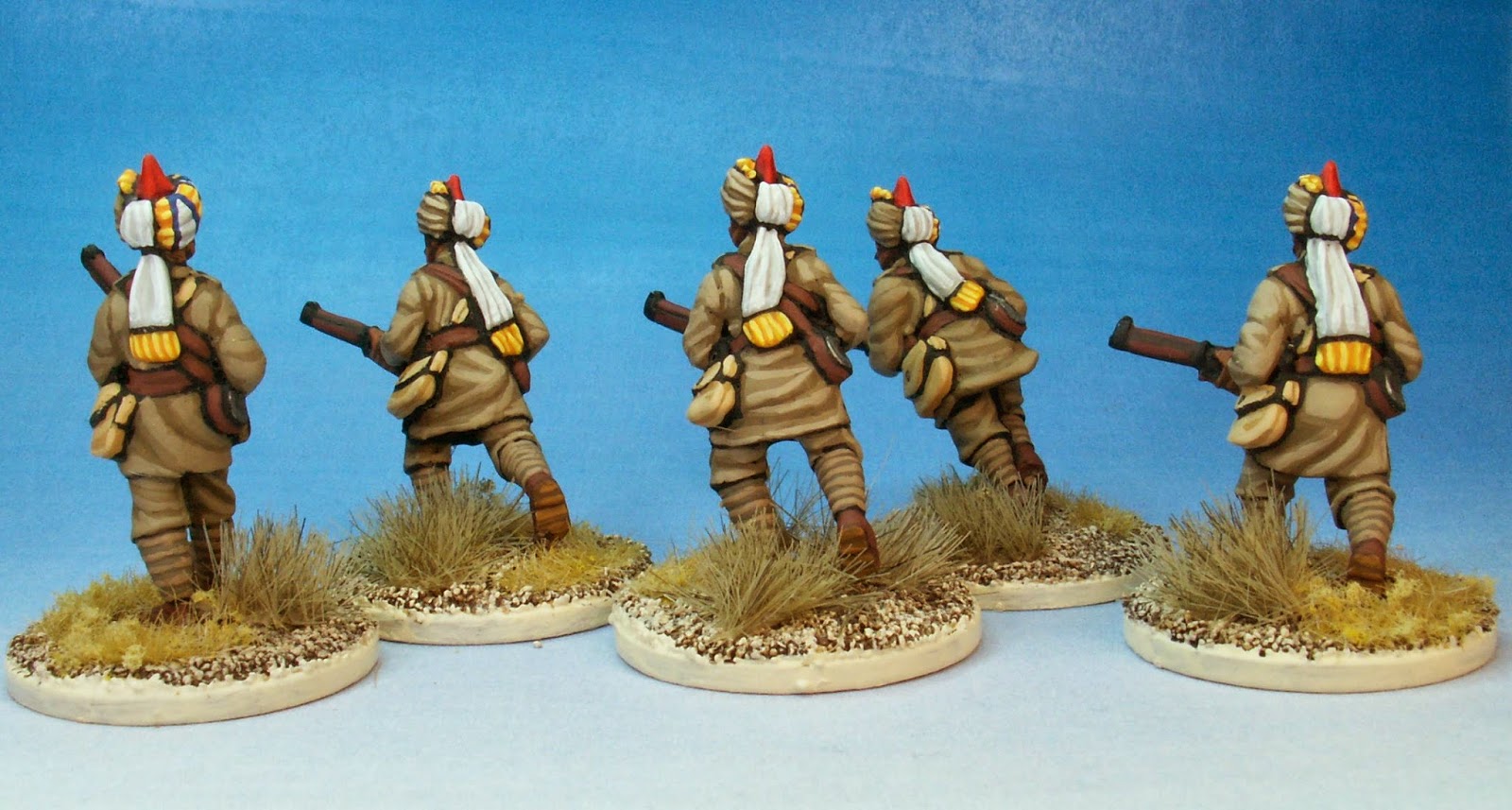 The start of the dismounted Deccan Horse. The decision was taken to use the Woodbine Designs WW1 Indian Army Rifle Section pack as a basis for these chaps. The knife, snips and file removed the bayonet, entrenching tool handle and the entrenching tool head from the small of the back and the agricultural application of some grey stuff to the rear of the turban gives an impression of the same head dress as worn by the Brigade Games mounted figures. 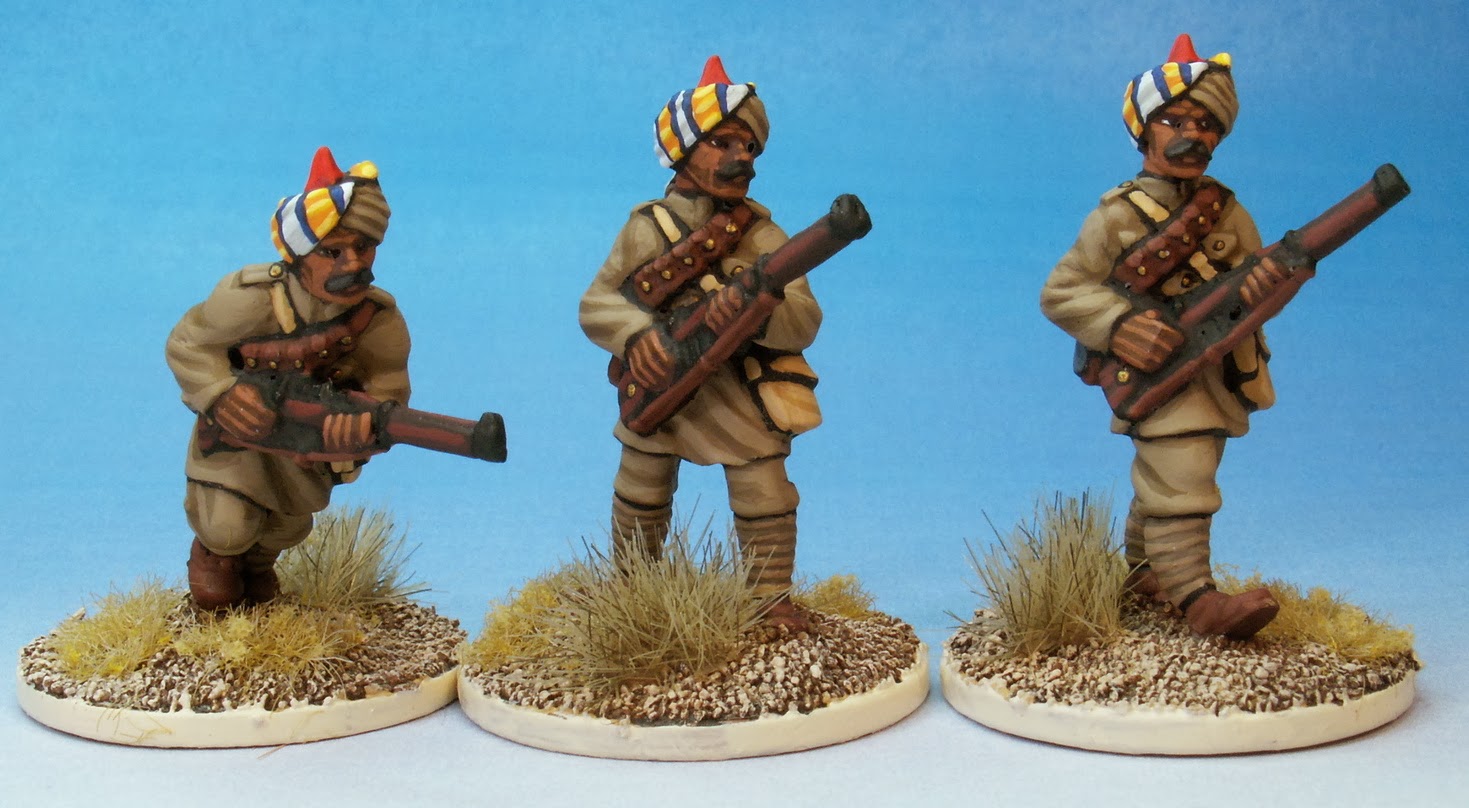 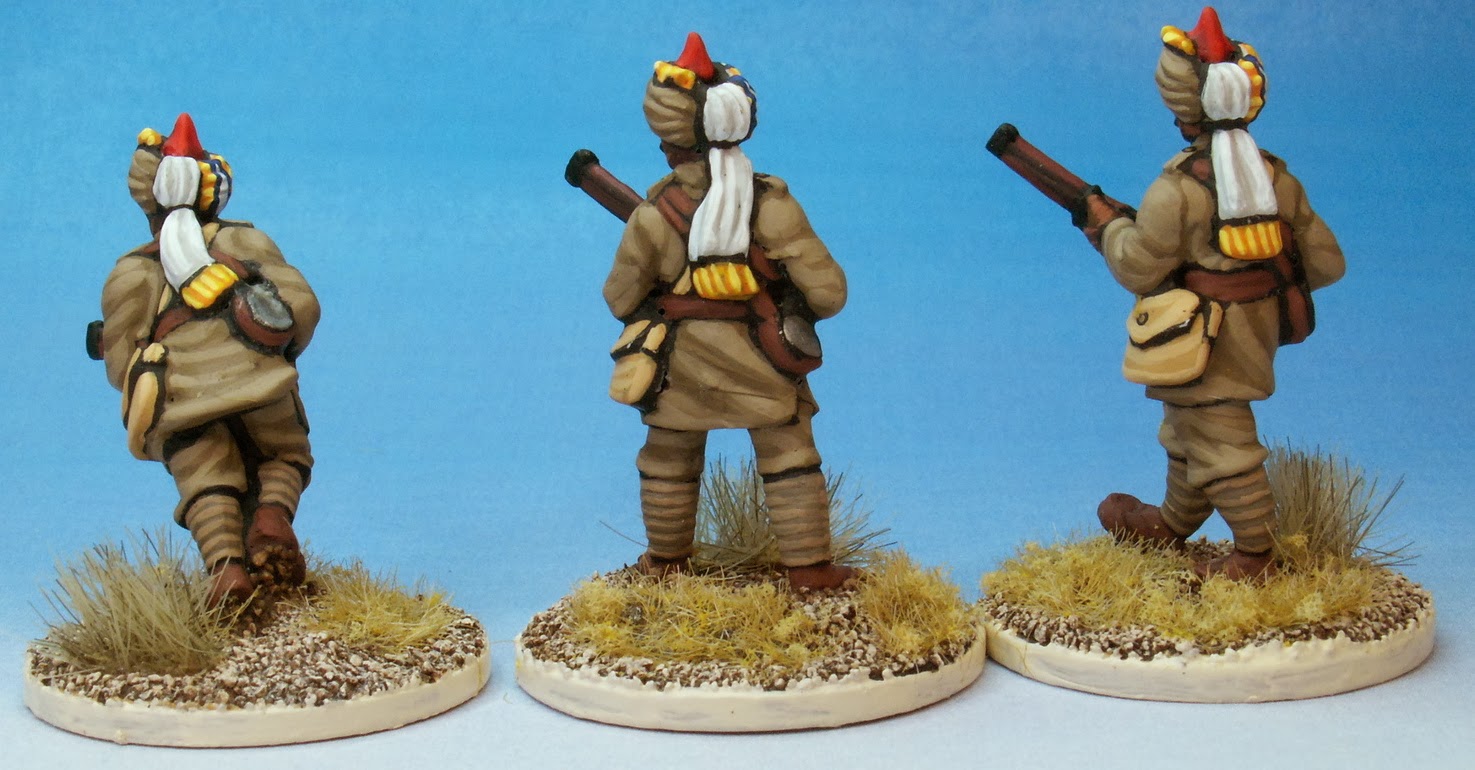