Four figures in marching order complete this group of twelve. 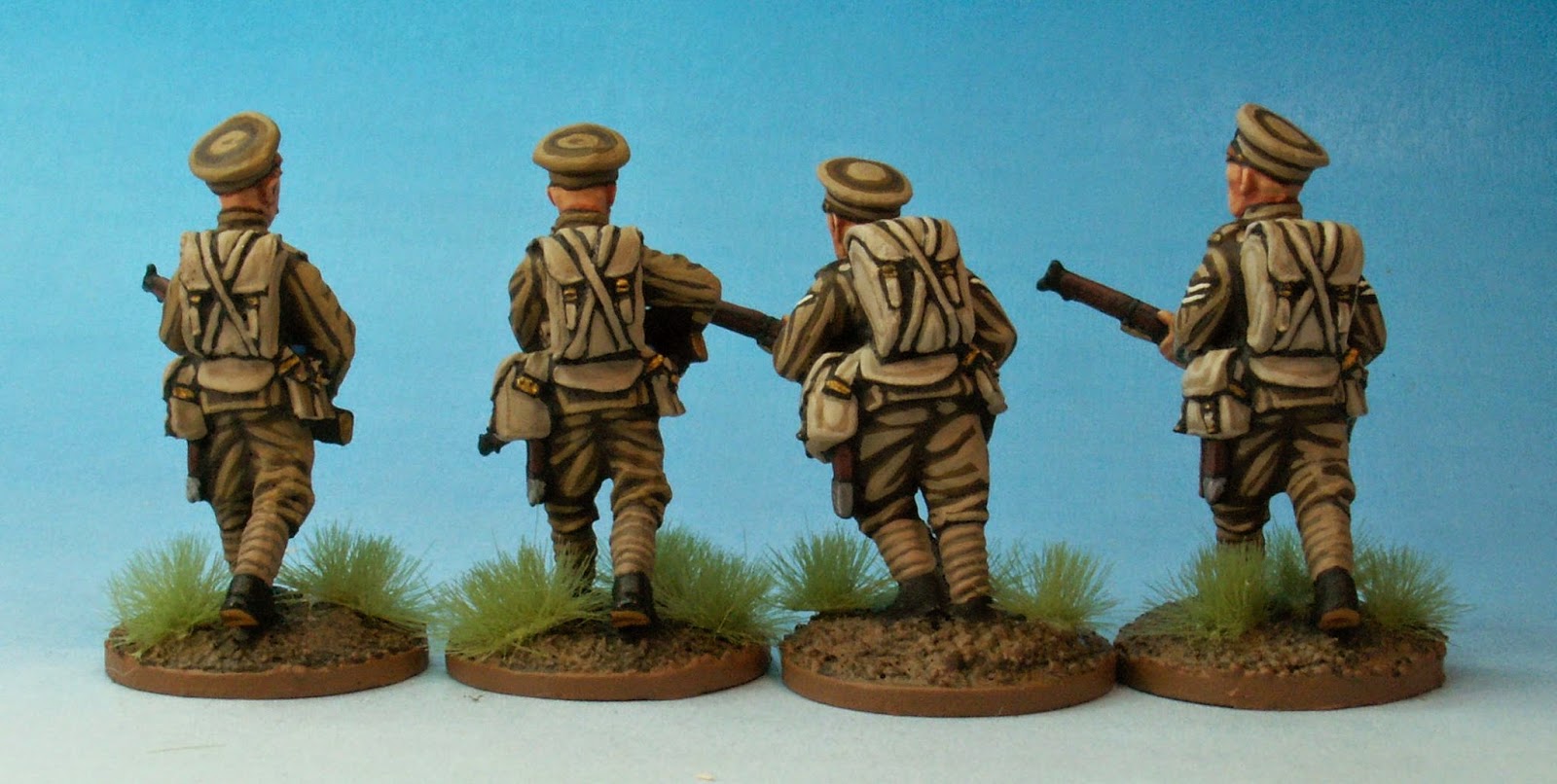 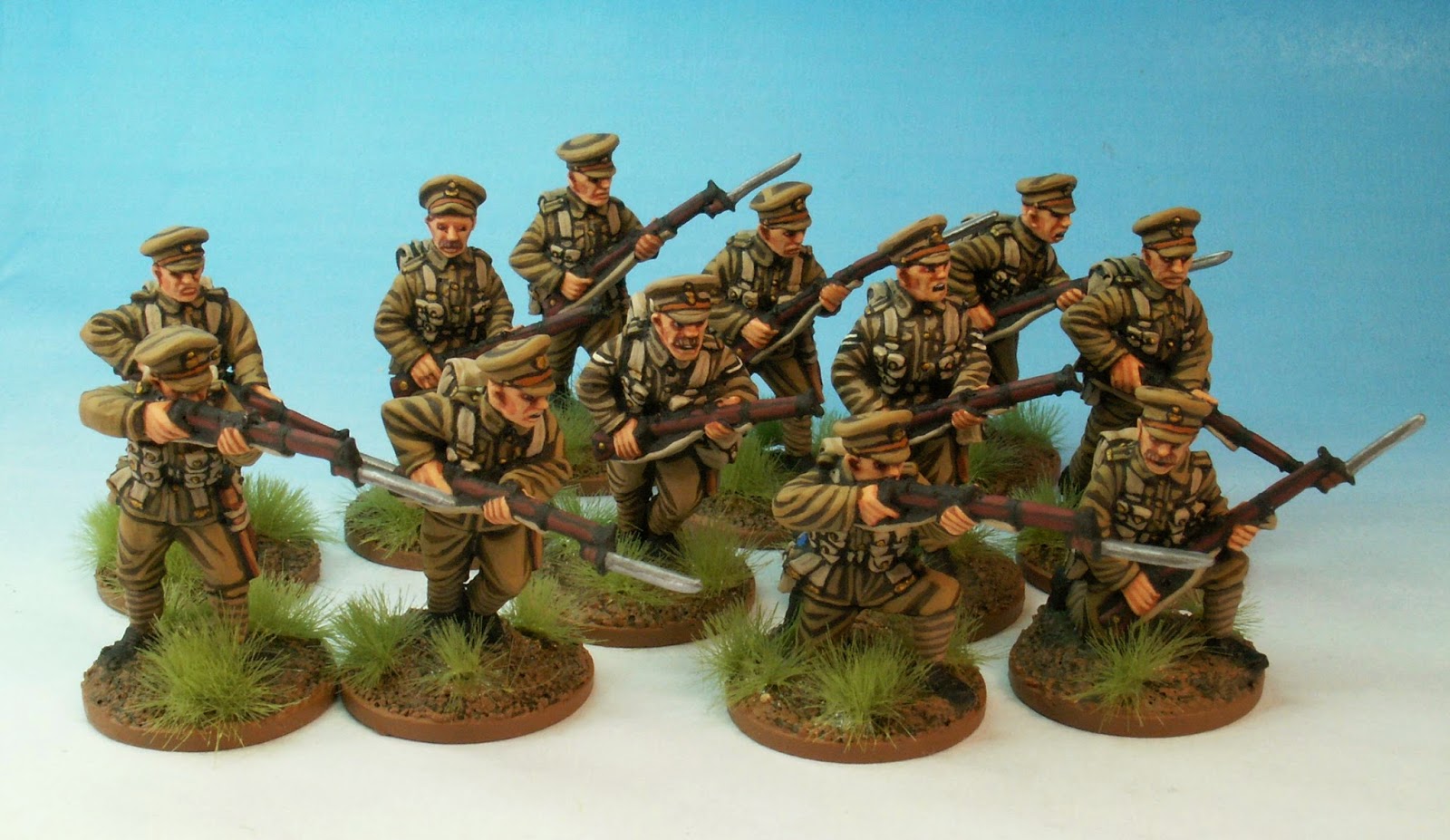 Four more to do to complete the full rifle section. AK Interactive uniform triad continues to make a positive impression on this painter.
Posted by Over Open Sights at Wednesday, November 26, 2014 5 comments:

To celebrate the passing of a lot of nonsense at work and a return to peaceful and  happier times, I painted something. The first visit to the painting table in about three weeks. Here we have more Hicks Niceness in the shape of pack BEF7 from his excellent Mutton Chop WW1 range of figures. These chaps are painted up with the AK Interactive British WW1 Uniform triad reviewed earlier on the blog. I wanted to see what a group of these figures would look like if painted with this triad. It is growing on me.

The plan is to paint up a twelve man section of these figures and then offer them up to the World for purchase. Watch this space.
Posted by Over Open Sights at Thursday, November 20, 2014 8 comments:

Having been alerted to the release of  three paint sets I took the plunge and ordered these via the miracle of PayPal on the interweb from the AK Interactive website. Here are the links to each paint set:
British WW1 Uniform
German WW1 Uniform
French WW1 Uniform

At £5.40 a set (current exchange rate) they are not a bad price, but postage from Spain is payable unless you purchase £70 worth of goods.

First up... the German Uniform triad. Here it is... 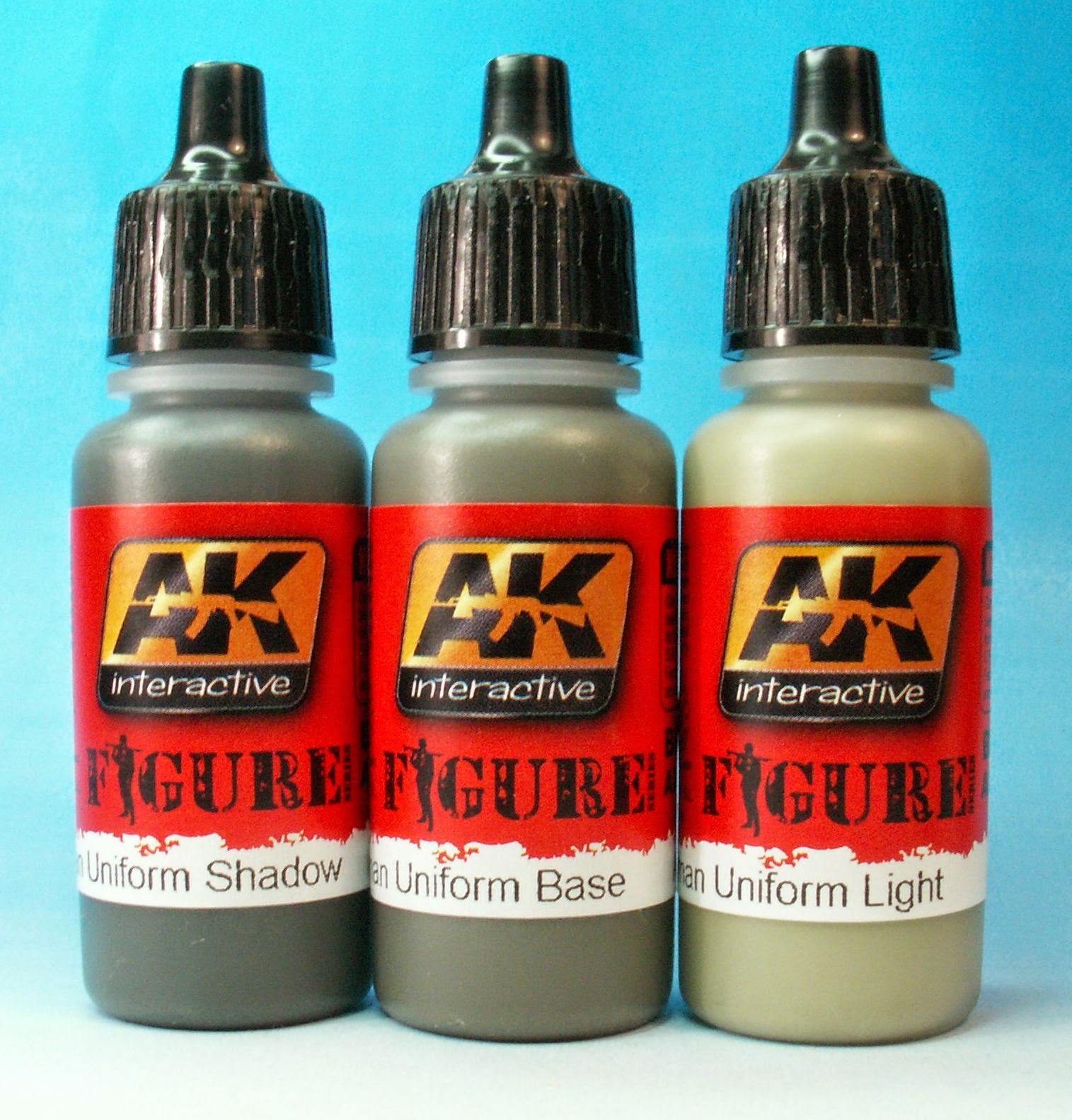 The paints themselves are very comparable to Vallejo Model Colour paints in terms of coverage and pigment levels.

This triad is useful to paint the TUNIC and FELDMUTZE. It is too green for the trousers.

My take on a triad as marketed thus is that the painter should be able to use the paints straight from the pot without mixing. With the German Uniform set this is true for the "Shadow" and "Base" paints but the "Light" paint is just too light for my tastes and I would recommend toning it down with a little of the "Base" paint. Here are the results on a Mutton Chop figure in light order kit (more tunic is exposed). The red band on the feldmutze has been covered with a khaki band. 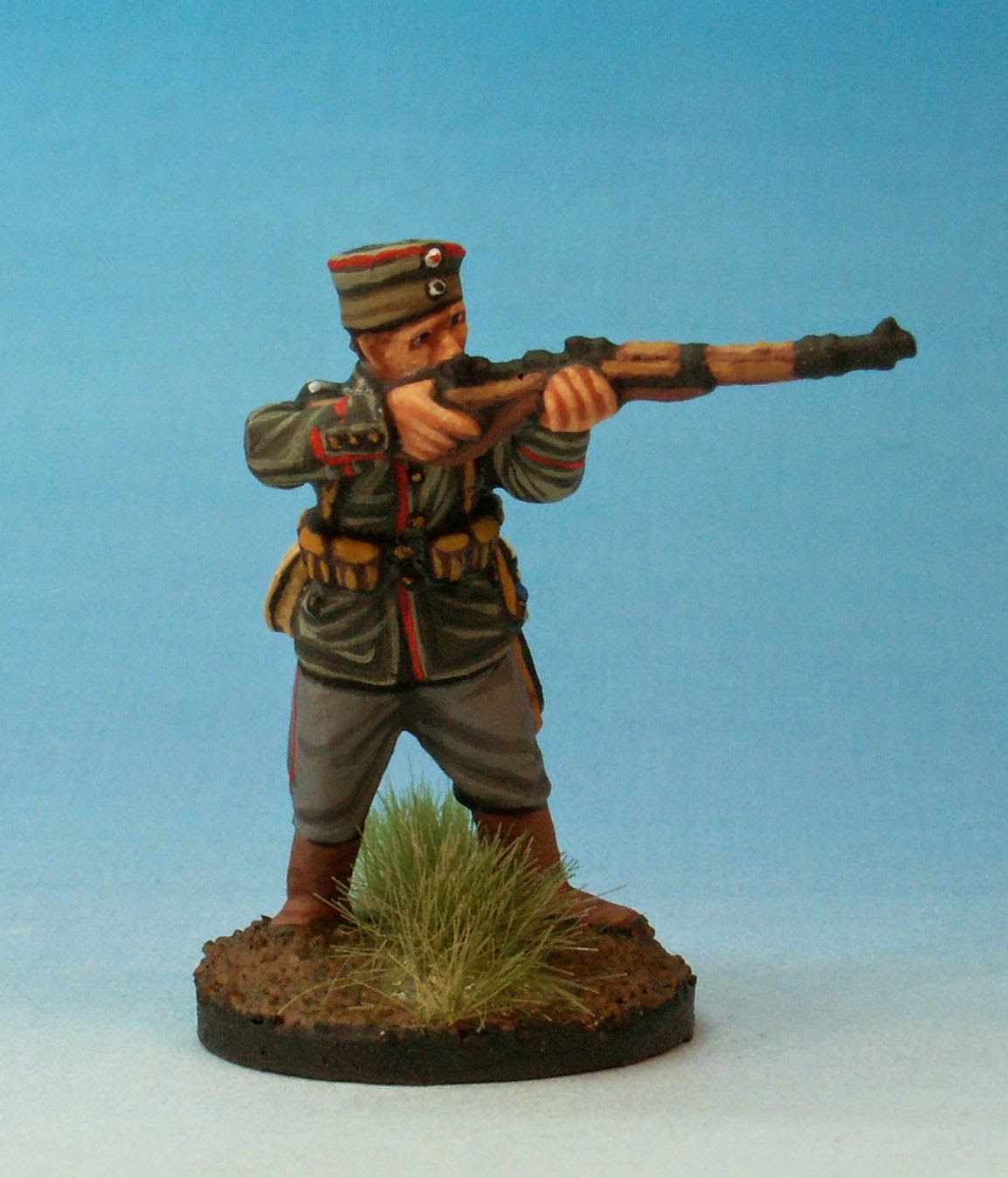 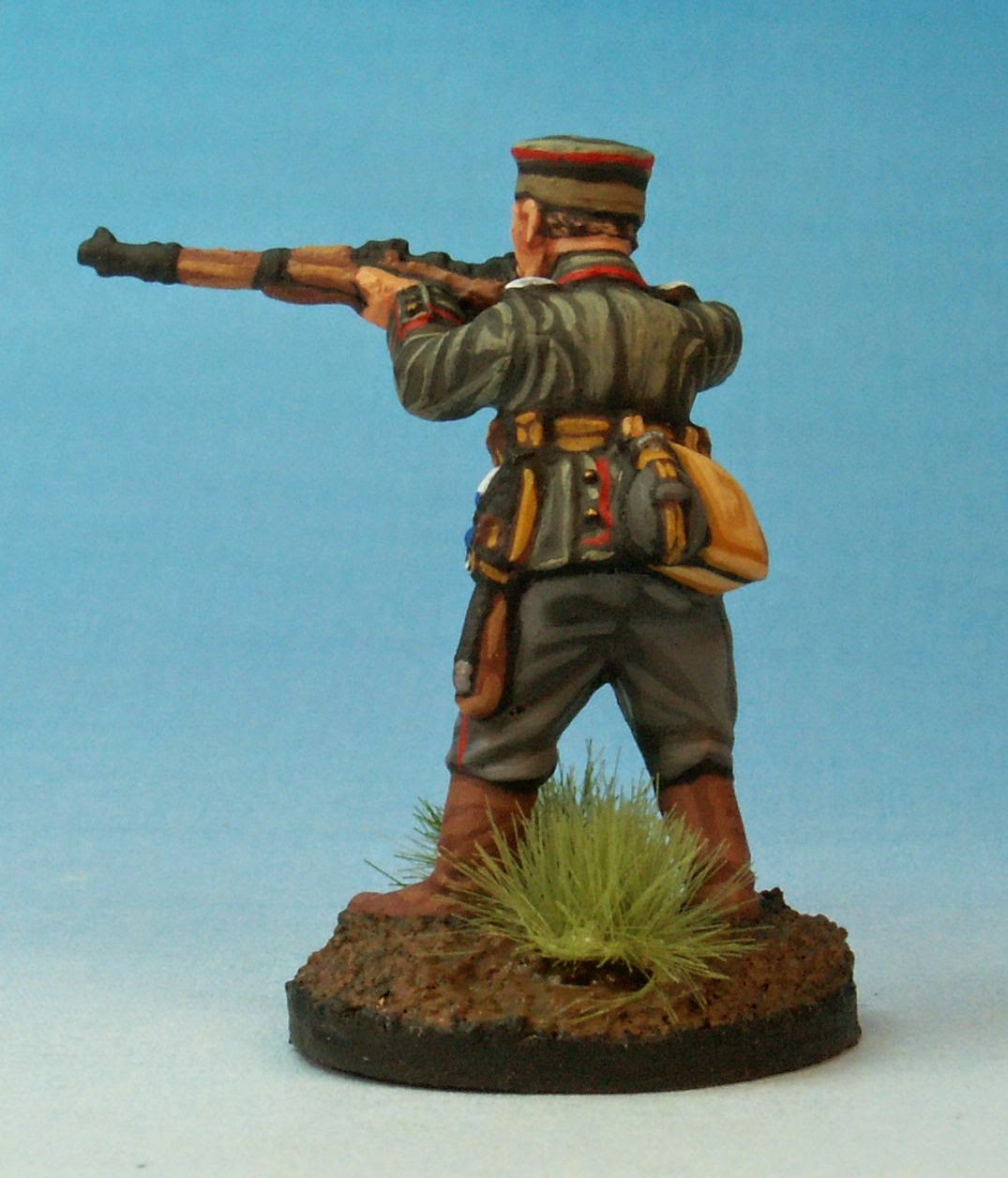 The end result is a darker field grey than I would normally paint, and this makes the difference between the "Base" and "Light" shades even more pronounced. Here is an image comparing this triad to my normal field grey recipe of a base of VMC Olive Drab, a mid tone of VMC Field Grey and a highlight of Field Grey lightened with the addition of a little light grey paint. 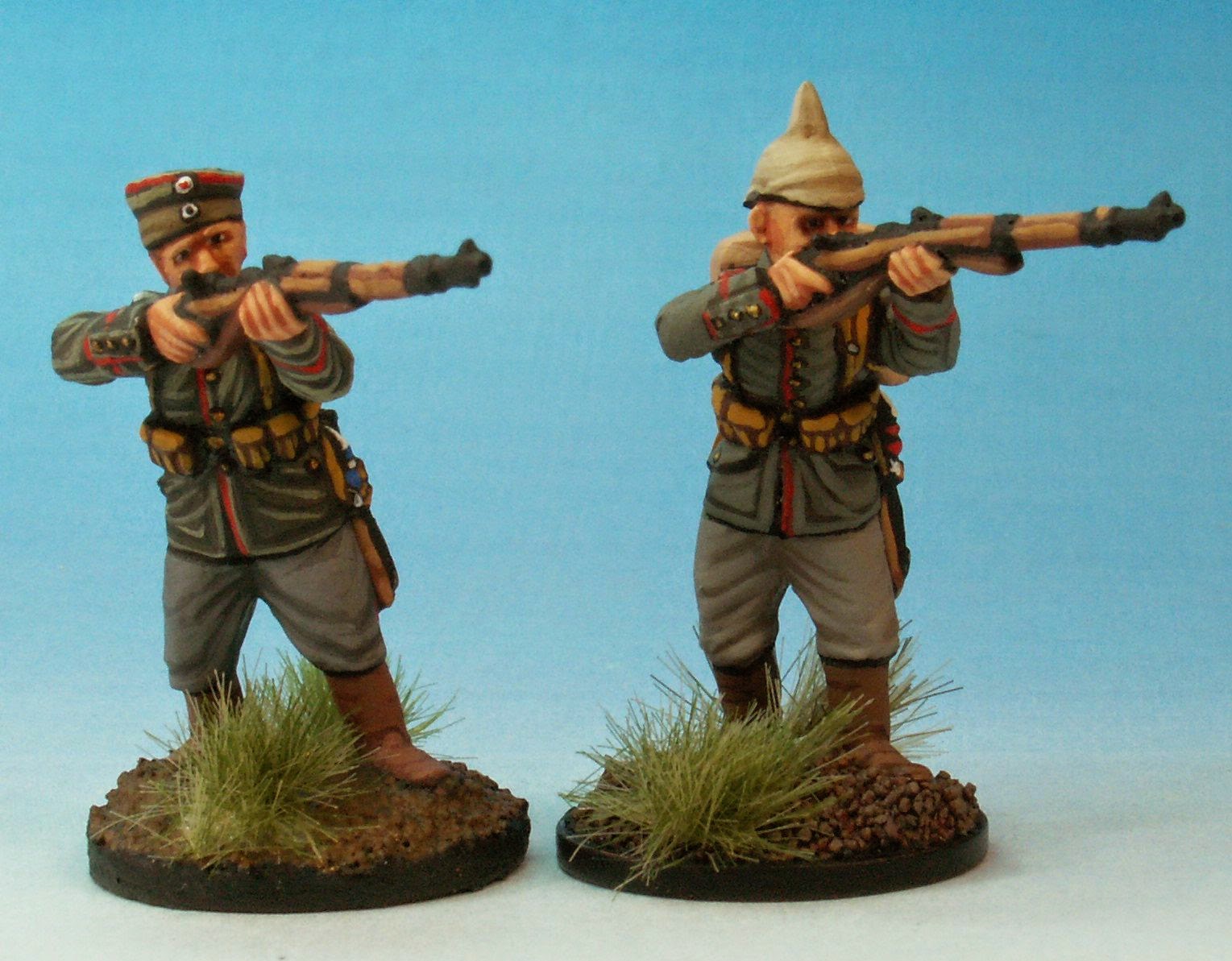 The British Uniform set is a very brown khaki whereas my personal preference is to have a more greenish tone. As I approached the paints my first thought was that, again, the "Light" paint was too light. Here is the triad and a GWM dismounted Cavalry trooper to show the result . The cap, tunic and puttees are painted with this triad (the riding breeches on this figure are NOT done with this triad but with VMC US Field Drab highlighted up with VMC Pale Sand). 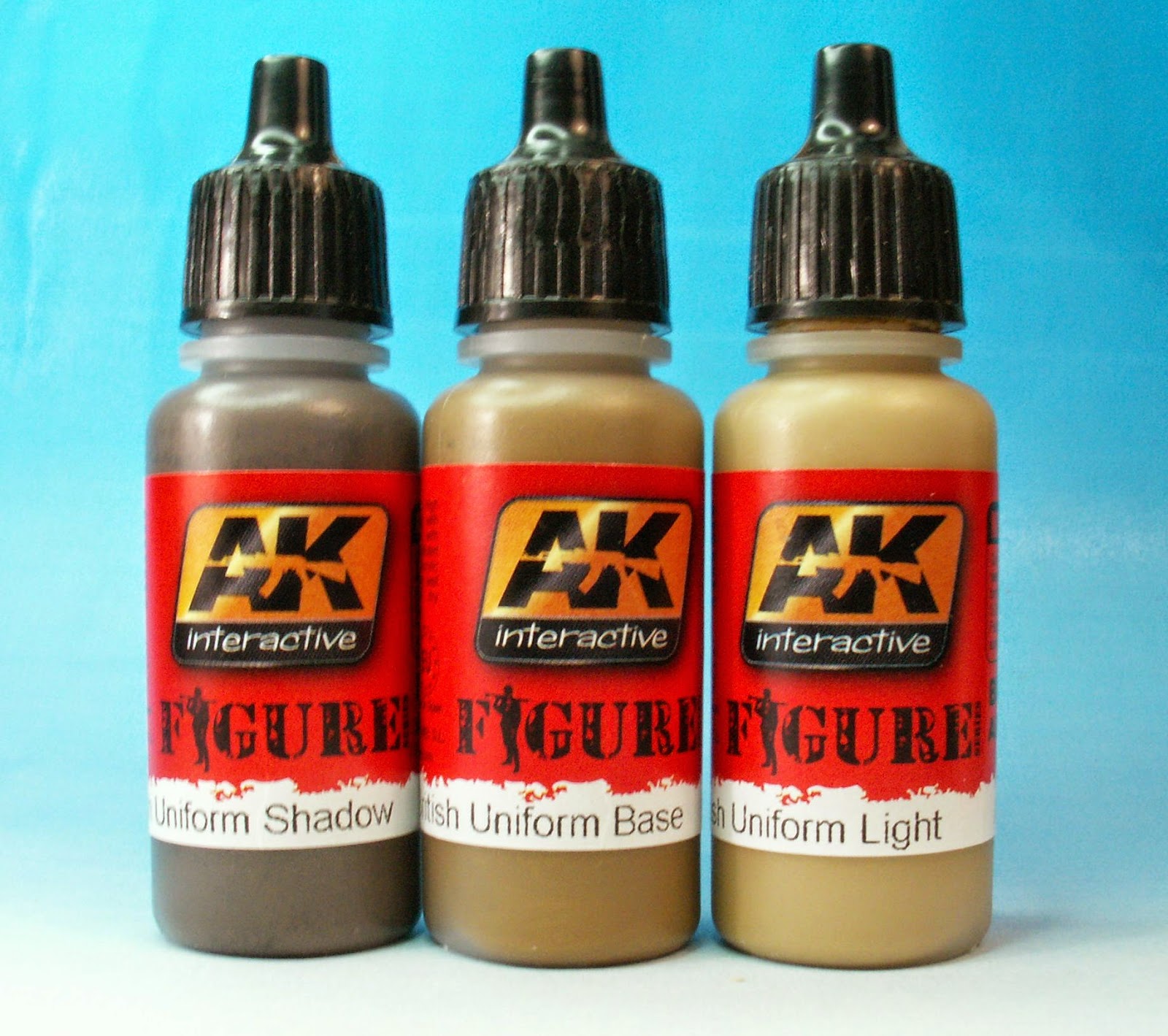 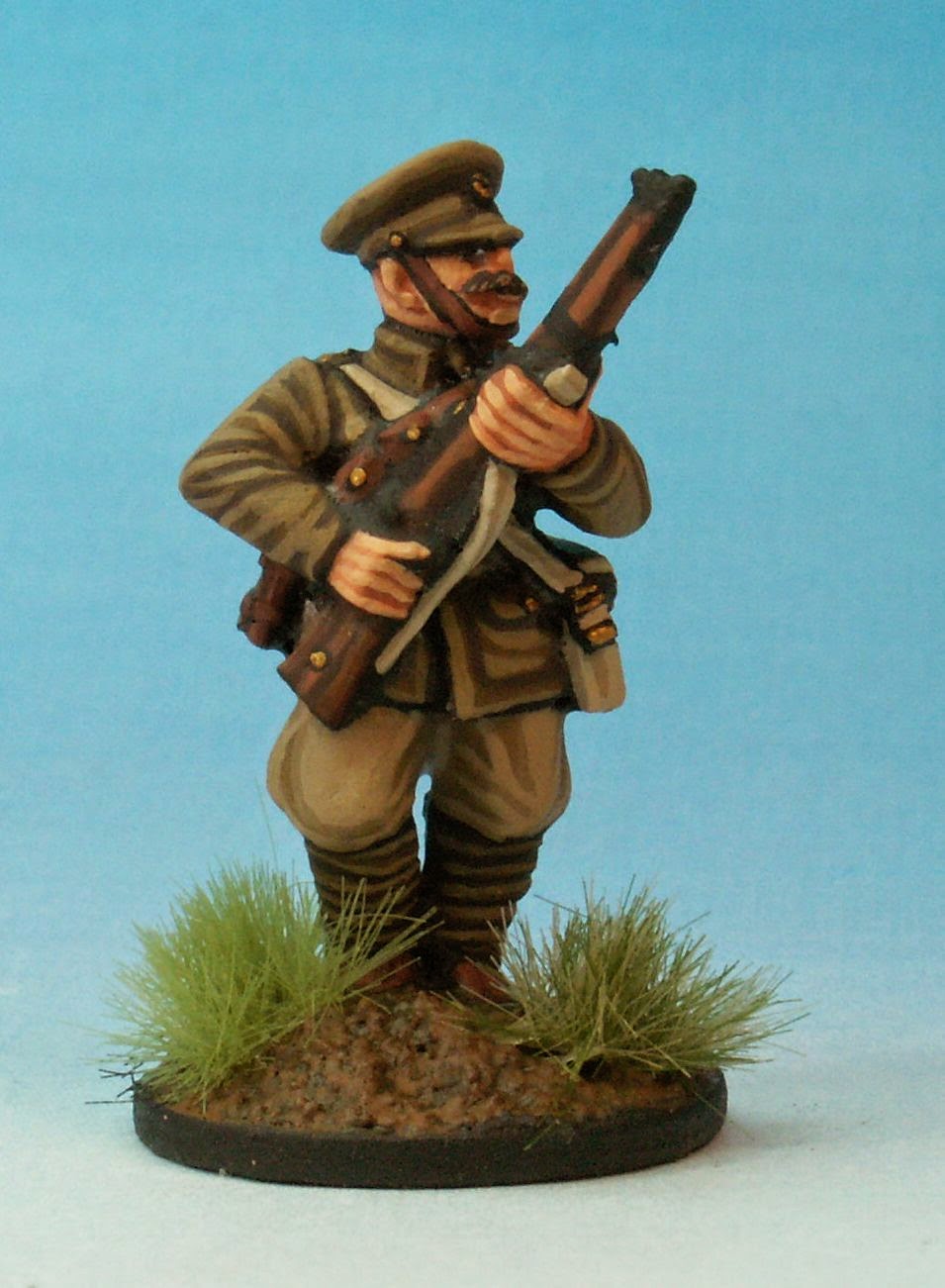 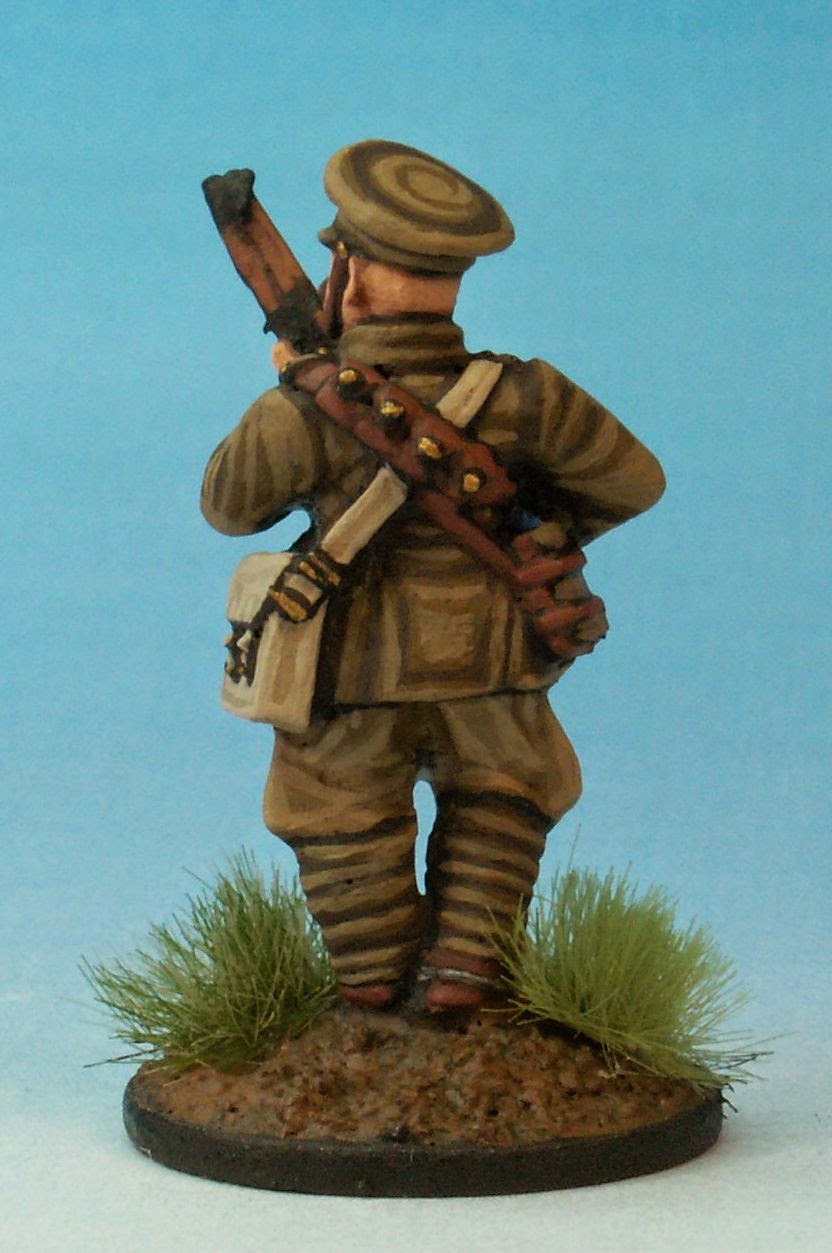 Once the figure was varnished the contrast between the "Light" and "Base" shade is not as pronounced as I had initailly feared and the end result also contained enough green to satisfy me. Here is an image of this figure next to a GWM Tommy painted up in my normal khaki recipe of a base of VMC Russian Green, a mid tone of VMC English Uniform and a highlight of VMC Green Brown. 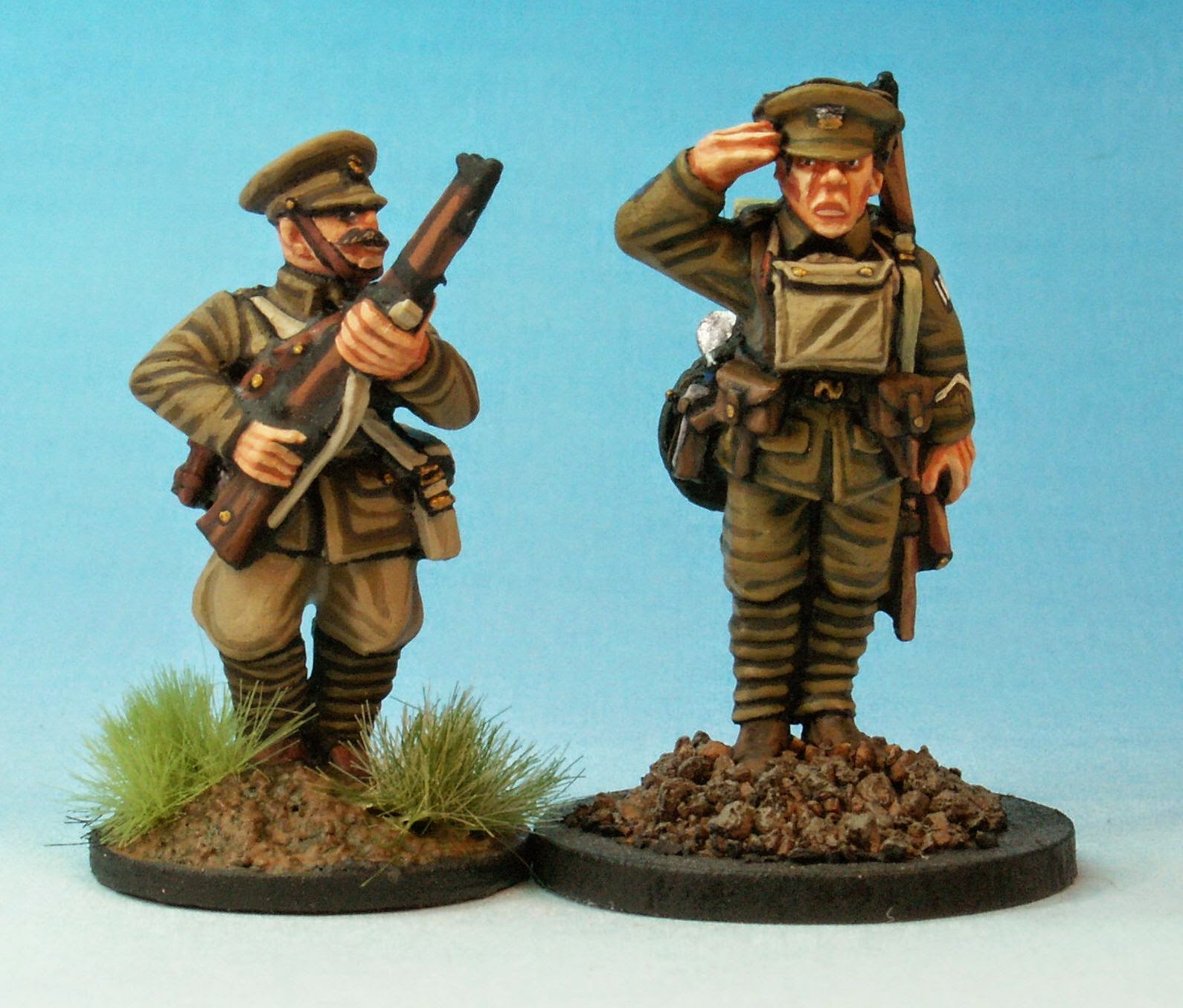 Having seen the end result I will definitely use this tiad to give a little variation of khaki shades within a unit.

Sadly, I have no French figures in the leadpile so all I can give you is an image of the French Horizon Blue triad in the pot and a swatch painted onto white paper. The "Light" paint seemed a bit lacking in pigment, but that may well be because I had not shaken up the pot enough. 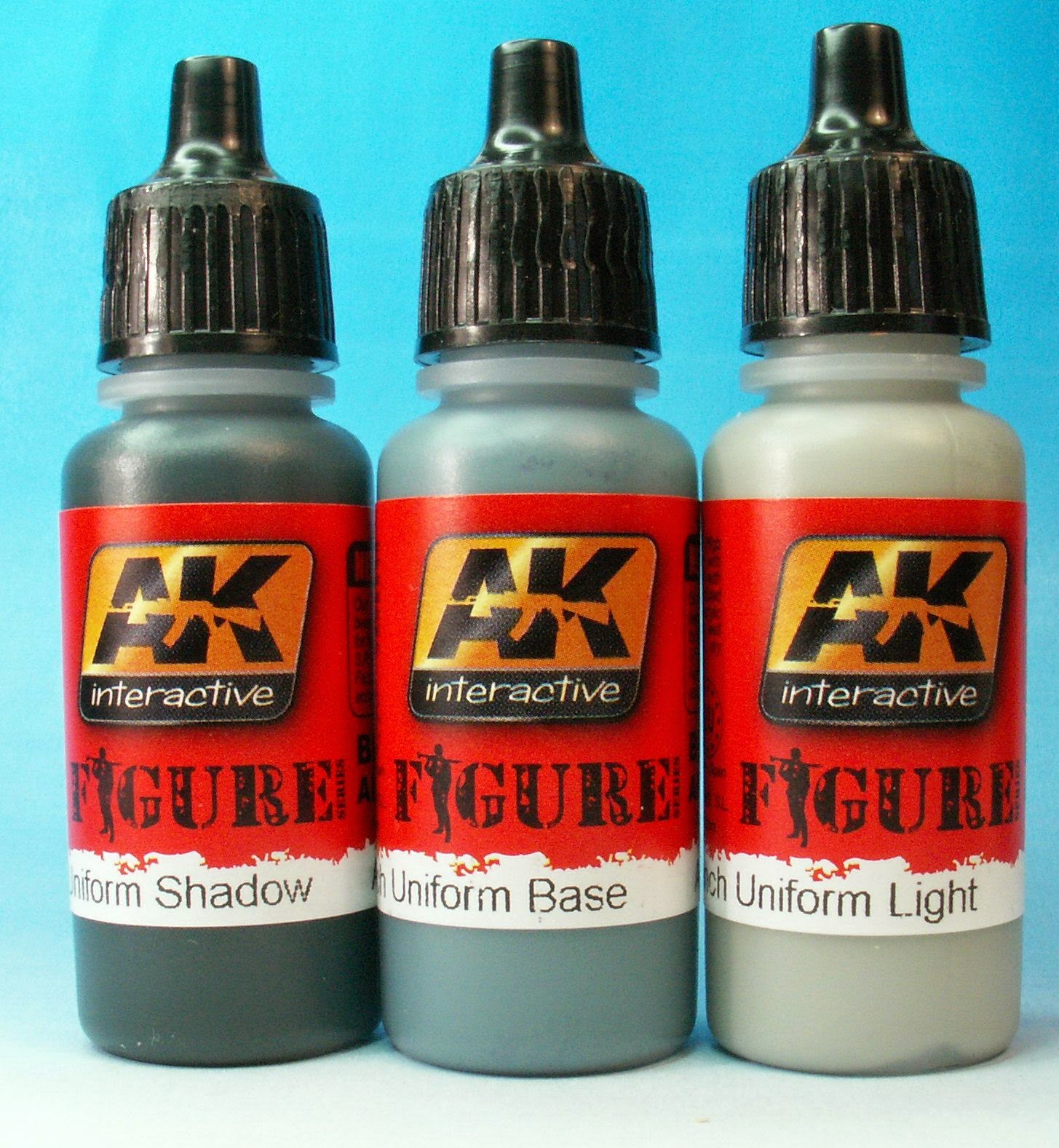 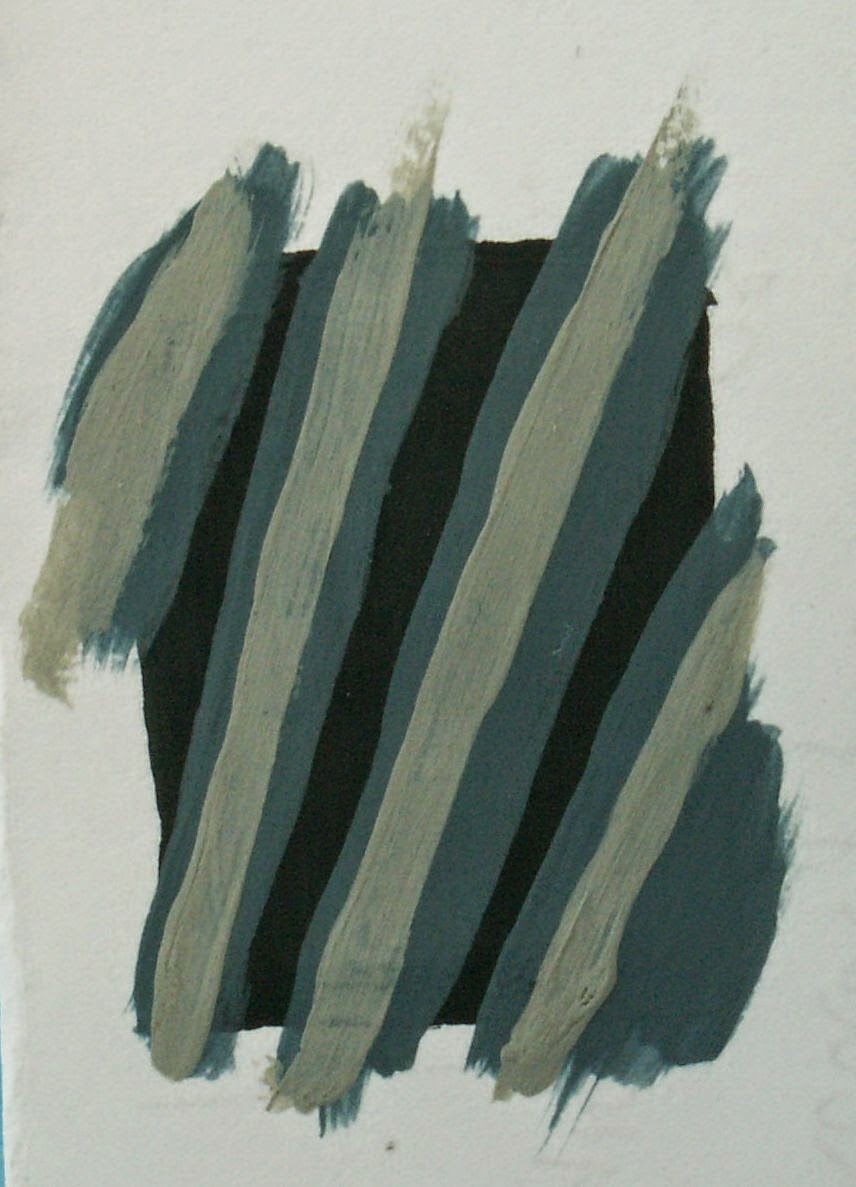 So, an overall verdict? Well, I bought them and I shall use them but certainly in regards to the German and British Uniform sets the similar results can be obtained without the expenditure... unless the lure of some of AK Interactive's paint sets for WW1 and WW2 AFVs means you need to top up the order to £70!
British Armour
French Armour
Posted by Over Open Sights at Sunday, November 02, 2014 4 comments:

Doing that Voodoo that you do so well.....

Every now and again something different lands on the painting table. Last year it was a Jazz Band and 1920s flappers. Now this.  Don't normally do this sort of thing (and it probably shows) but here are some Haitian Zombies from the Brigade Games Caribbean Empires range. A few more live Voodoo types to follow. The strange green creature is a Chupacabra.... you don't find many of these in the Vale of the White Horse so visual reference material was hard to come by. The bulging eyes, thousand yard stare and misaligned pupils on the undead types are intentional... not just poor rendering of eyes. I am completely out of my depth with this sort of thing so big thanks to Michael Awdry who was kind enough to give me a few pointers on paint schemes for Zombie flesh before I got started.

The one thing I did not want was a end result that "popped" to the eye. These individuals are the undead.... not the cartoon flesh eating types,,, just the shuffling and gently decaying sort. Instead of using my normal "apply paint with trowel" approach, these are done with a series of thinned washes foregoing a final highlight. 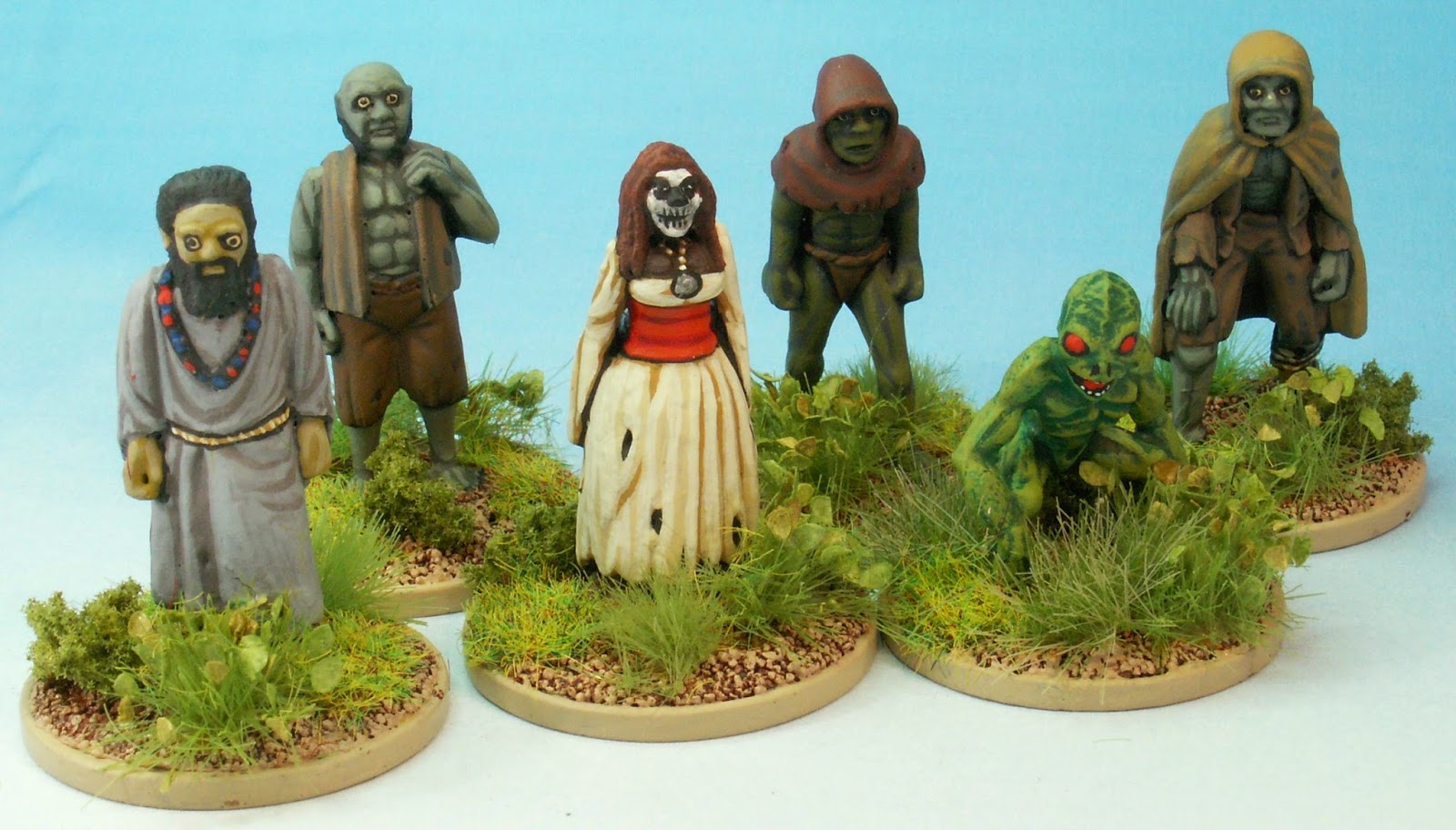 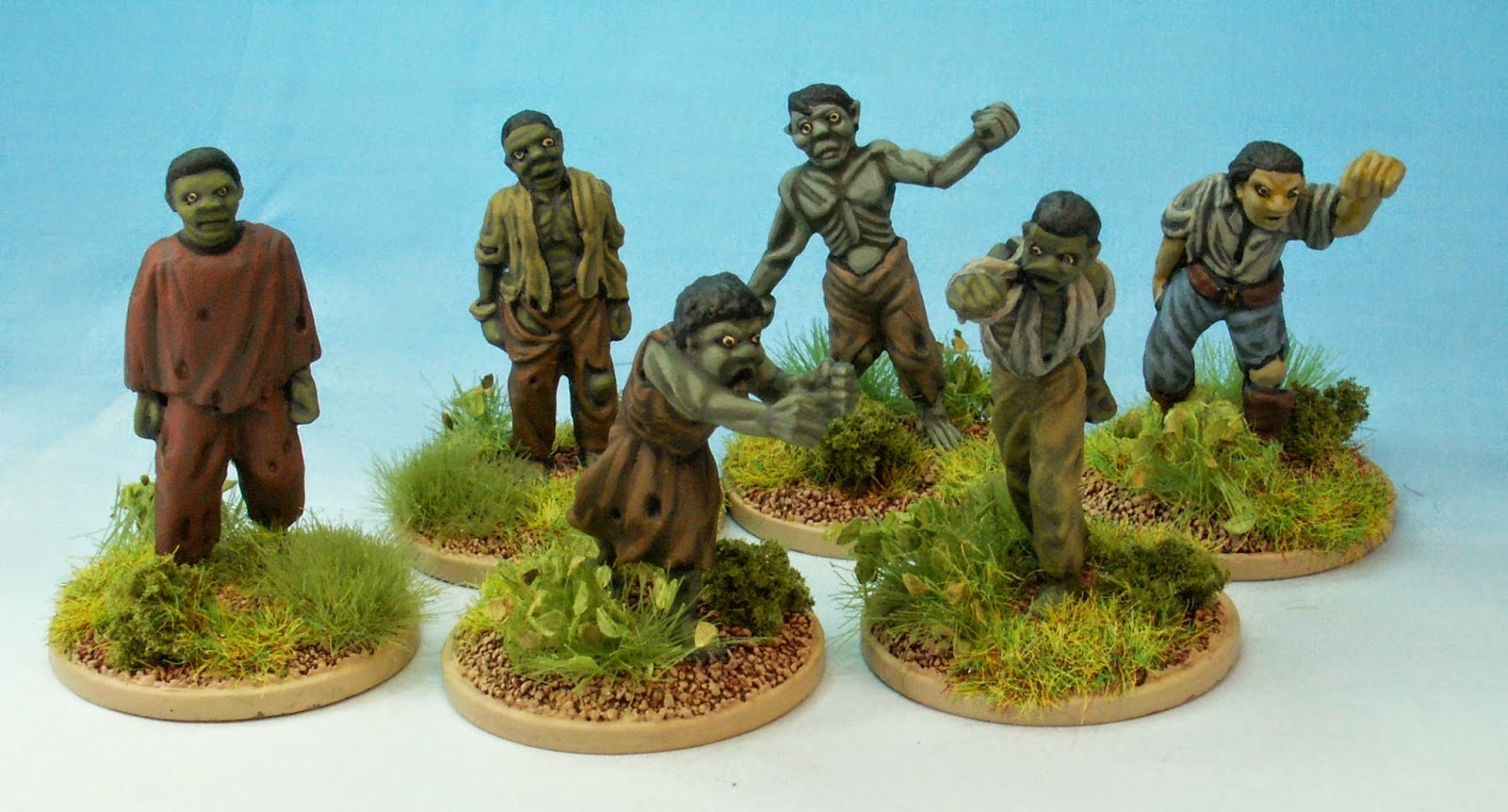 Thankfully, the rest of this project involves US Marine Corps and Haitian Gendarmarie. I think I can cope with them.

Back to the comfort zone, next, as I try out a couple of test figures using the new WW1 triads from Spanish firm AK Interactive. A review to follow.
Posted by Over Open Sights at Saturday, November 01, 2014 2 comments: