Austria provided two batteries of heavy mountain howitzers to support the Ottoman effort in Sinai and Palestine. They were equipped with the Skoda 10cm Schwerer Gebirgshaubitze M1916 but no one makes one of those so to stand in here are some Austrian gunners (as seen before) manning a Brigade Games 7.5cm Skoda Gebirgshaubitze M1915. The trail deliberately broke into two pieces. 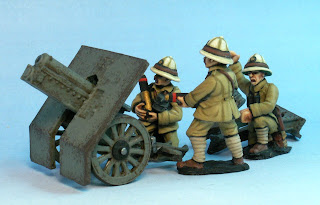 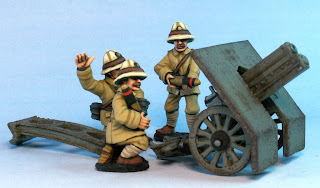 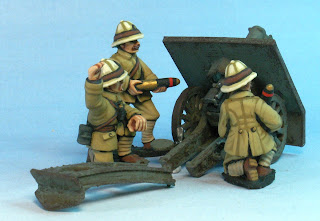 These are the 1/56 Mk I Tanks from JTFM Enterprises in Canada. They have had a minor alteration to make them look like the eight Mk1 tanks that were sent to Palestine in 1917. They were sent by error. The original plan was to send Mk IVs but eight Mk I tanks from the training establishment at Thetford, Norfolk, were dispatched instead. By the time the error had been discovered the tanks were already stowed in the bottom of the holds of cargo vessels bound for Egypt. They were covered with tons of supplies and other material. Rather than unpack the Mk Is and risk delays finding Mk IVs, these "old" tanks set off on the voyage. They arrived with the Egyptian Expeditionary Force still covered in Thetford mud.

Both H.M.L.S. Nutty and H.M.L.S.Otazel took part in the Second Battle of Gaza, April 1917. Six Mk Is fought in that battle.

H.M.L.S Nutty supported 163 Brigade on their attack on "Tank Redoubt". Nutty was a  Mk I ‘Female’ tank under the command of 2nd Lt Frank Carr which held a crew of 7.

Private 3247 Joseph Emms of ‘B’ Coy from the 1/5th Norfolks described Nutty’s advance;

‘We suddenly heard a tremendous rattling noise coming from behind and keeping my head as low as possible I chanced a look behind and saw a tank coming at full speed not a hundred yards behind and firing all her guns which was a fine sight to see.’

As soon as the Turks saw the tank, every gun they had fired upon it causing high numbers of casualties among the Norfolks following in its wake.

Nutty reached the redoubt. It was hit and burst into flames. Five of the crew, all wounded, appear to have managed to get out. They were captured. Lt Carr died of his wounds some days later. 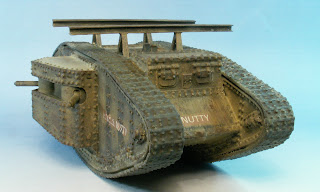 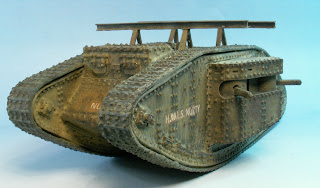 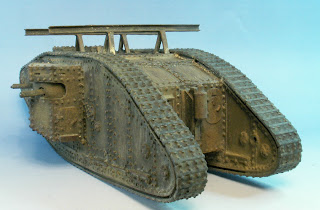 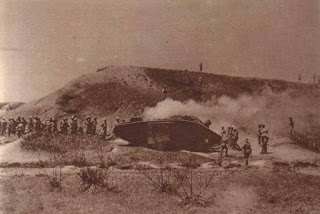 H.M.L.S. Nutty prior to the Second Battle of Gaza. 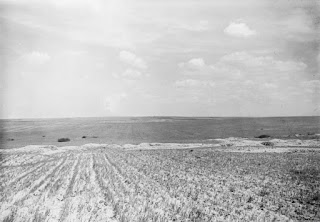 The view towards Tank Redoubt from 163 Brigade's position. 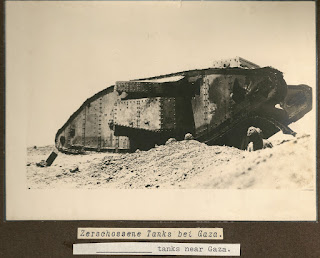 The wreck of a Mk I female tank at Gaza with turkish troops in the foreground. I have seen this image labeled as the wreck of H.M.L.S Nutty.

A good description of the fight at Second Gaza can be found here.

The Imperial War Museum has a piece of footage showing both H.M.L.S. Otazel and "H.M.L.S. Nut" (this has to be Nutty) training prior to Second Gaza. It can be seen here.

The Mark I "Male" tank H.M.L.S Otazel was ditched in a wadi at Second Gaza. It was dug out and recovered. Below is an image of Otazel on a beach somewhere with the right track peeled up. Perhaps undergoing some sort of maintenance. 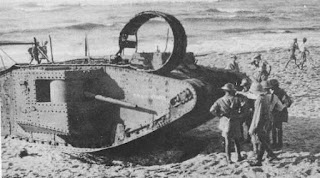 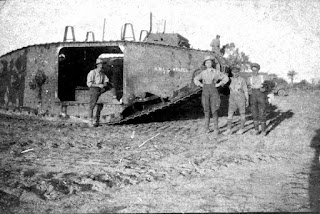 After Third Gaza, the Mk Is seem to have been relegated to a supply and transport role. Here is Otazel with her sponsons and guns removed. The extra ventilation must have been very welcome to the crew. The hole in her armour is perhaps battle damage and I believe the photograph below is a close up of that same damage. 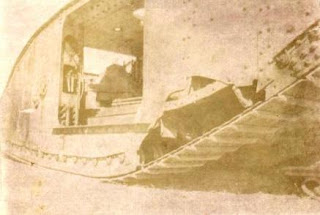 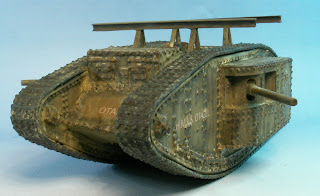 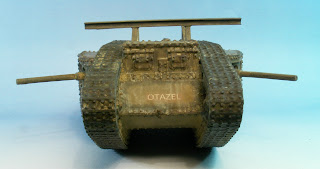 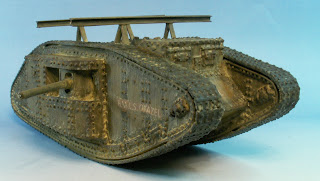 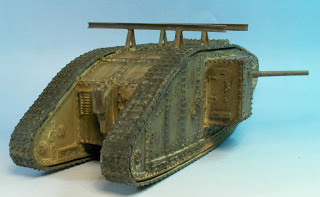 It is about time that when invited to "table" I turn up with some figures of my my own rather than to rely upon the kindness of others. So here is the start of 163 Brigade from 54 Division, 1917. The first of ten figures painted up as 1/8 Hampshire Regiment T.F (The Isle of Wight Rifles) in a mix of khaki drill and khaki serge uniform ready for service in Palestine. They have been training with PH Smoke Hoods and General Murray has taken delivery of gas shells to use against Johnny Turk at Gaza. The figures are from Woodbine Designs and the Lance Corporal is a Footsore Tommy with a headswap. The recent Mutton Chop Tommies wearing smoke hoods will also find there way into 163 Brigade. Another five IOW Rifles to follow soon.

What I like about this group is that the chaps wearing shorts have been sculpted wearing P1914 leather equipment while others have P1908 webbing. That and a mix of tropical and serge uniform give a variety of colour.

Today was a good day. I drove over to meet Rodger and to deliver "The Special Project". We took some photos of "The Special Project" set out on Rodger's table. The article for the Wargaming Press has been written, submitted and accepted and the Editor tells me that it will be published in the July edition of "Wargames Illustrated". I have kept virtually all this work under wraps as I promised the Editor that it would be "new" material, not featured on this blog. This is why the frquency of posting has fallen off over the last few months. However, I could not let today go by without giving you all a teaser taster of what will be in the article. 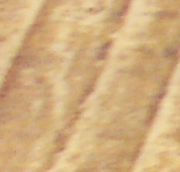 A couple of ladies from from Hinterland Miniatures that will be used in a "Pulp" setting as Imperial Germany attempts to stir up trouble in Persia. The figures and the camels are both sculpted by Alan Marsh. These two camels are the best I have come accross, particularly the beast running with the outstretched neck. 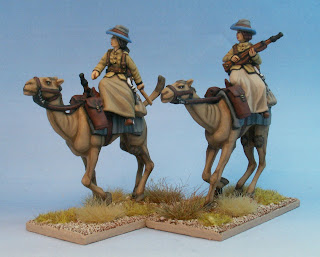 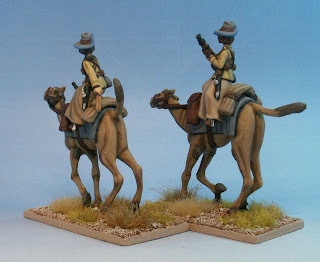 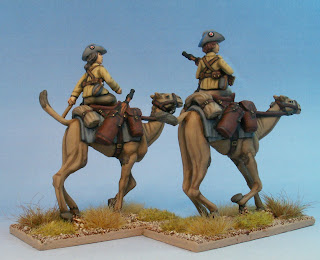 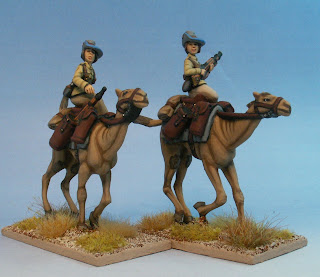 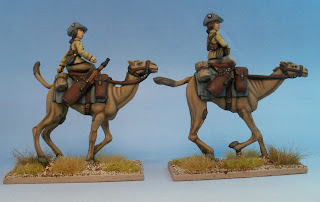 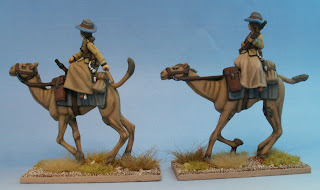 Bigger Guns for the Central Powers.

March has been busy away from the painting table and progress on things has been much slower than anticipated. However, here are two scratchbuilt guns. Both are meant to be generic types for the Central Powers. The first is a 150mm Howtizer with gun shield. It should pass as a Krupp or a Skoda. The stipple camouflage scheme helps hide a multitude of sins. The crew is a converted set of Austrian gunners poised to serve in Palestine in support their Ottoman allies. The conversion is a simple headswap onto some late WW1 GWM German gunners and a tropical paint sheme. The heads are Woodbine Wolseley heads with some judicious work with the file to create a more rounded brim. The puggaree on each has been filed away and replaced with a greenstuff band and badge. 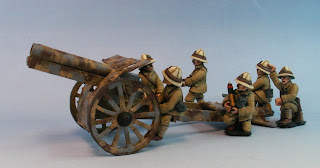 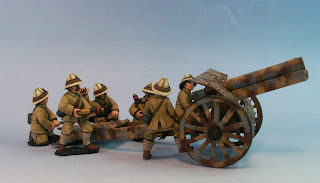 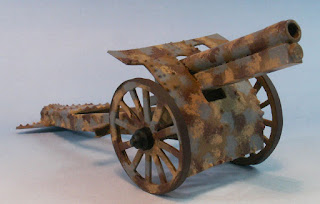 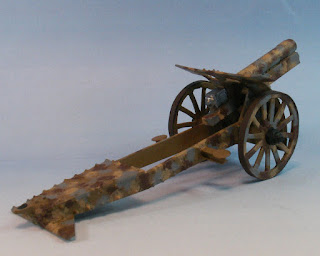 This second piece is based on a Krupp 10cm gun. 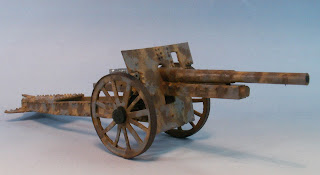 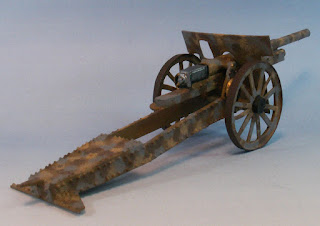