Here are the four outstanding figures needed to complete the 1/4 Norfolks (TF). Three Woodbines and a Footsore Miniatures figure.

A picture of the completed unit.

A couple of weeks ago I was able to read 163 M G Coy's War  Diary  at the National Archives. A great deal of information can be gleaned from this document starting with the formation of the Company in April 1916 with the amalgamation of the eight brass jacketed Vickers-Maxims from 1/8 Hampshires, 1/4 Norfolks, 1/5 Norfolks and 1/5 Suffolks and their problems in attempting to increase the number of guns in the company to sixteen. Personnel were a problem too. It seems that right up until the Third Battle of Gaza in November 1917, the ranks were filled by very few new men of the Machine Gun Corps being brought in from the UK. The diary indicates that many men were "on attachment" from the battalions of 163 Brigade with groups of men being rotated in and out of the MG Company. Hence these figures all wear different patches on their helmets and a purely conjectural yellow patch on the sleeve to denote being attached to 163 M. G. Coy. 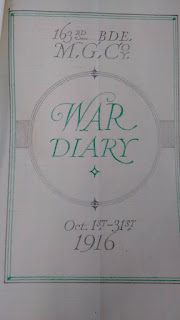 The title page for the month of October 1916 before the Company became a company of 54 Battalion Machine Gun Corps in April 1918.

So here we have the Company CO, Captain Taylor and his CSM with a scratchbuilt rangefinder.... 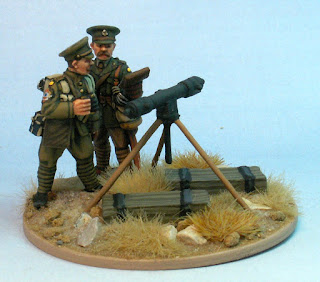 ... and the battery itself.

All these figures are either Mutton Chops  or Footsore Miniatures all with Woodbine headswaps.

Here is a page from the diary that mentions the support given by eight of the Company's guns to a raid on "Beach Post" made by a group of 1/8 Hampshires on 14th October, 1917 a couple of weeks before Third Gaza. 16000 rounds of ammunition were fired in a "barrage" before the Hampshires attacked. By this time the Company was equipped with sixteen Vickers guns shipped in from the UK. The Diary of 1/8 Hampshires has a very detailed description of this raid.... but that is for another visit to the National Archives. 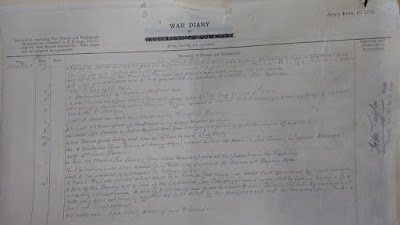 Oct 27 GAZA FRONT 202696 Pte. Johnson P.C., 1/5th Suffolks attached, ammunition carrier, was wounded in the head by a premature burst of one of our own shells. His steel helmet was pierced but broke the force of the splinter and undoubtedly saved his life. This was the first parade on which the steel helemets had been worn.

That answers a question of mine.... when did steel helmets reach Palestine?

Final elements to the Asia Corps 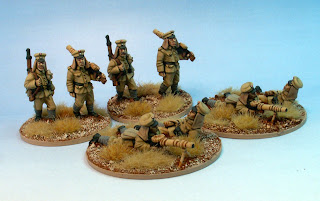 Next, a unit of ten Jaeger. Four battalions of Jaeger were assigned to the Asia Corps, three battalions of the 146th Jaeger Regiment  and the 11th Reserve Jaeger Battalion. In reality, they probably looked just like the rest of the figures in this project being equipped with the sun helmet or soft visored cap. For variety these figures have retained their distinctive shako and badger skin backpack. Perhaps not historically accurate, but an interesting diversion. The Officer, bugler and kneeling NCO come from Great War Miniatures and the remaining seven figures are from Mutton Chop. 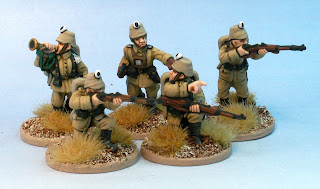 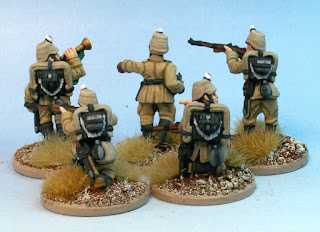 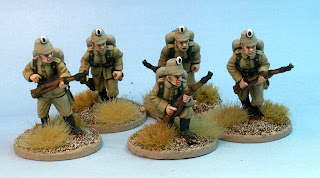 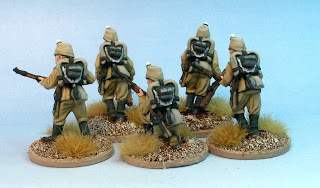 I didn't have a lot to go on when I was tasked to create figures to represent the single squadron of German cavalry that served with the Asia Corps in Palestine in 1917-18. All there was was a single grainy photograph showing a few lance armed troopers. 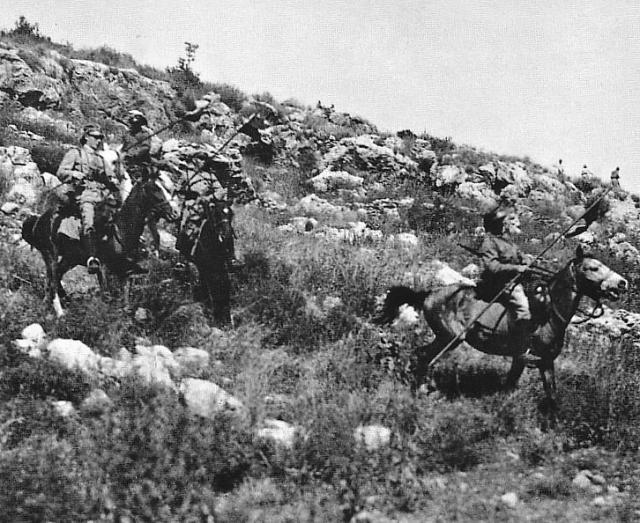 So, taking the Crusader Miniatures WW2 German Cavalry as a base the snips, scalple, drill, greenstuff  and Woodbine heads in soft caps were pressed into use. 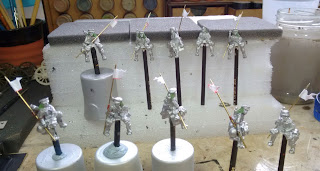 Once painted we get this. 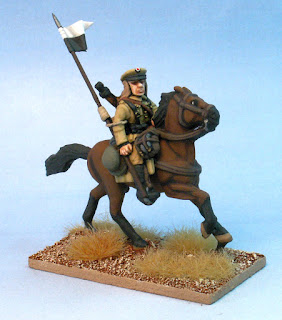 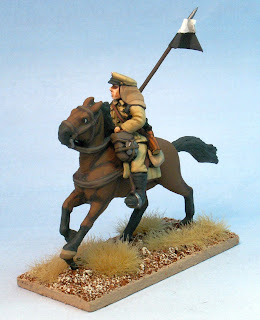 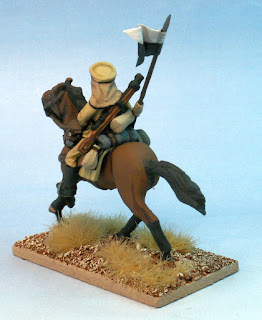 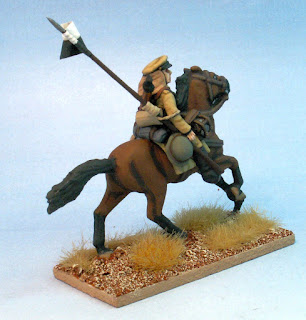 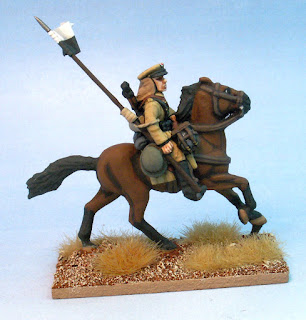 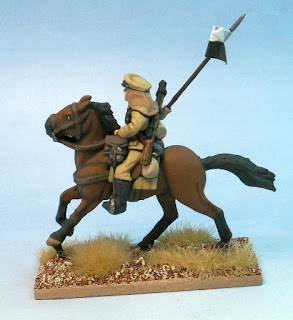 Add a few more and I have to say I am very pleased with the end result. 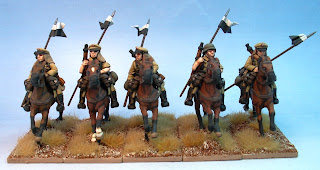 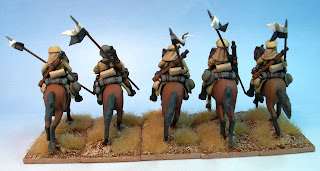 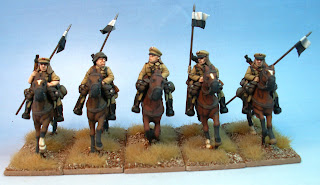 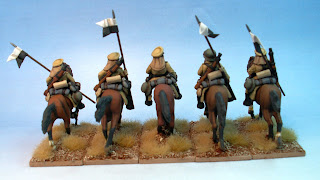 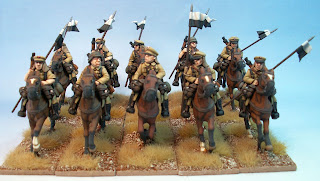 Crew from Brigade Games and the guns are the GWM 77mm FK96 with a lengthened barrel to make them look like FK16s. The Brigade Games FK16 model that came with the crew just looked too small to my eyes. 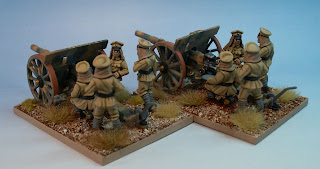 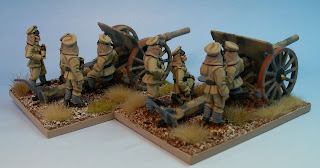 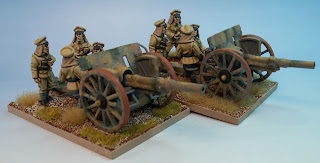 Some more Czech legionaries for Rodger's train. They are in the post. See what I did there? The Czechs are in the post? Thank you! I'm here all week.

For the most part these are Copplestones with couple of Forgotten Front figures thrown in. Instructions were to paint them up in a "hotch-potch of uniform." 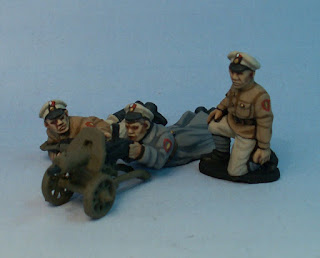 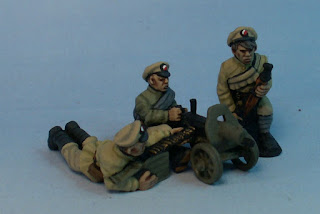